The New York Stock Exchange (NYSE) is open Monday through Friday, 9:30 a.m. to 4:00 p.m. EST. However, it closes for official U.S. holidays or in the event of a major disruption. Most U.S. exchanges follow the NYSE’s schedule. Below is a complete schedule of NYSE Holiday closings for 2017-2018. 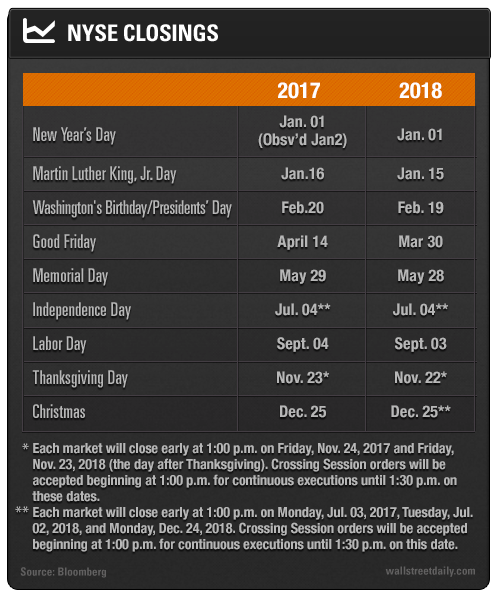 In addition to holidays, the NYSE may shut down under a variety of circumstances, including inclement weather or national emergencies…

The assassination of President Abraham Lincoln in 1865 caused the first extended closure of the NYSE, shuttering the exchange for more than a week.

The exchange was down for five months in 1914 at the onset of World War I. The market didn’t close on December 8, 1941, the day after the Pearl Harbor bombing, but did close for two days in August 1945 to mark the surrender of Japan.

The NYSE closed September 11-14, 2001, following the terrorist attacks on the World Trade Center and the Pentagon.

For instance, NYSE closed for three days in 1889 to mark the centennial of President George Washington’s inauguration. The exchange was also down for three days in 1892 to commemorate the 400th anniversary of Christopher Columbus’ arrival in the New World.

Hurricanes, computer failures, and power outages have also prompted unexpected closings of the NYSE. On July 8, 2015, for instance, the computer systems at the NYSE went down for nearly four hours during the day’s trading session.

To keep you up to date in the world of dividend investing, Wall Street Daily is excited to provide you with a “Handy Dandy Dividends Calendar.” It includes all the essentials on the major stocks set to go ex-dividend throughout the year.

Whether you’re using a “dividends capture” strategy – scooping up dividend-paying stocks in the eighth inning, getting paid, then selling in the ninth – or you’re a traditional dividend investor wondering what companies are currently set to pay dividends and when, the calendar below will give you everything you need to set you on the right path.

Just click on a date below and companies going ex-dividend will appear. Please remember, to be entitled to receive the next payment, you need to own shares at least one day prior to the ex-dividend date. Safe investing!