It’s Time for a Reversal in Small Caps

The Russell 2000 Index recently fell 9% in a little over a month. That quick drop has pushed the sector into oversold territory.

We haven’t seen this kind of setup since March 2020. And as you probably know, that was an incredible buying opportunity.

It wasn’t the only one, though… History shows that buying small caps when they’re beat up – like today – is a winning strategy. A 16% gain in small caps is possible over the next year. But you need to act fast.

“Bottom fishing” is a dangerous way to invest. It’s when you look around for “value” in beaten-up areas of the market.

The problem is that falling stocks tend to keep falling. So while it might feel heroic to time the bottom, it’s usually a losing strategy.

Instead, what you want to do is find something that’s beaten up and buy after prices have reversed. That’s where oversold setups come into play.

If you’re new to this idea, we’re talking about the relative strength index (“RSI”). It’s a contrarian tool that lets us see when an investment has gone too far, too fast in either direction.

An oversold extreme often marks a buying opportunity. For example, when an asset falls below and rises back above an RSI of 30, hitting oversold territory, a short-term move higher is likely.

It basically means that a beaten-up asset is begging to move higher… which is exactly what we want to see.

Small caps recently fell below an RSI of 30 for the first time in over a year. Take a look… 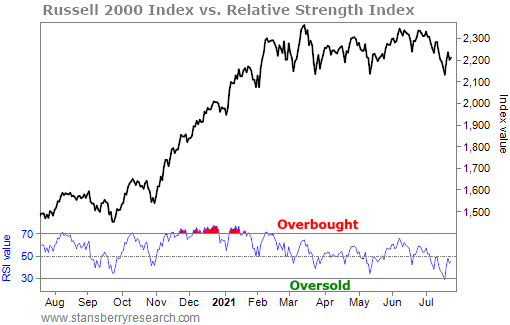 This sector has taken a hard turn lower recently. Again, it’s down roughly 9% from its June peak through last Monday’s close. But history shows that the worst is likely over.

Since 1990, similar setups have happened roughly 1% of the time. And outperformance tends to follow. Check it out…

Not many sectors return roughly 10% per year for three decades. But as impressive as that is, today’s setup blows that return out of the water…

Previous extremes have led to 5% gains in three months, 8% gains in six months, and a 16% gain over the next year.

Prices haven’t made a huge reversal yet, but they’ve started to drift higher. That means small caps are a safe bet right now. And the iShares Russell 2000 Fund (IWM) is an easy way to make the trade.

History says you can expect 16% upside from here. So if you’re interested in double-digit profits, it’s time to bet on a reversal in small caps.

Inflation Alert: Stocks are getting strange.

Americans Are Finally All-In on the Stock Market

Today, Stansberry Research financial expert Dr. David Eifrig joins us at Wall Street Daily. He discusses why you need to own stocks today, but shouldn’t buy at the top.

How to successfully trade during shortened holiday weeks.

Choosing the Right Sector to Invest In? Let’s Make It Easy

The reality, though, is that even a depressed market sector doesn’t need to impact your trading by a significant degree, especially if you’re into penny stocks or day trading. You’re looking for individual opportunities.

There’s a Warrant Out for Your Success

Penny stocks are a two edged sword. Simultaneously very lucrative, and very dangerous. If you are going to trade them, you need to understand as much as you can about every aspect of them. Today, I’m going to cover warrants and Employee Stock options, and what they mean for you.

Understanding THIS Can Increase Your Profits

How understanding stock movements can keep you from losing money in the market.

Let’s All Go To The Movies?

Great Stuff editor, Joseph Hargett explains why AMC is now poised to actually win big post-pandemic. “The company will survive, and it will come out of the pandemic leaner and better capitalized than when it went in.”