This Year’s Powerful Start Could Lead to More Gains in U.S. Stocks

That kind of kick start to a year is rare. We’ve only seen similar rallies 13 other times in more than 70 years.

Don’t bet on a slowdown, though. History shows that this kind of surge isn’t likely to run out of steam…

We could see even more gains to finish off 2021. Another double-digit rally is possible in the next six months.

Bull markets don’t die of old age. That’s important to remember when we’re in the thick of a rally like today’s.

Yes, the S&P 500 has been on a one-way trip higher since bottoming in March 2020. But that doesn’t mean the Melt Up has to end tomorrow.

That’s why we always want to turn to the numbers to make our investment decisions. And today, history shows us the current rally likely has more room to run. 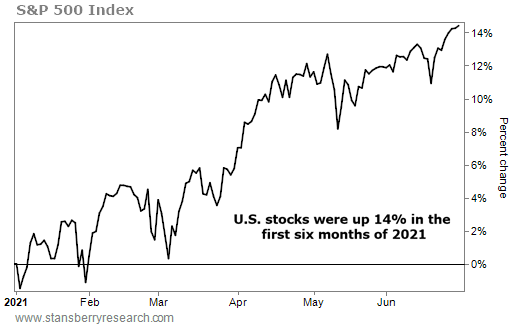 We’ve seen a strong surge in U.S. stocks so far this year. And history shows us that the rally can continue…

Since 1950, we’ve seen 13 other first-half rallies of the same magnitude or more. And those typically led to even higher highs in the following six months. Take a look… 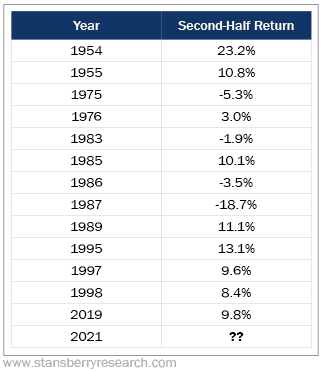 More than 70 years of market data shows us that today’s impressive move is a good thing. Nine of the other 13 examples turned into winning trades. And five of them rallied 10% or more to finish the year.

Simply put, you shouldn’t be worried about stocks after a fantastic first half… You should be bullish.

Yes, the Melt Down will rear its ugly head at some point. This bull market, like every other, won’t last forever. But don’t confuse inevitable with imminent.

Today’s bull market isn’t out of steam just yet. A strong move to finish the year is possible – even likely – based on history. And you want to be along for the ride as long as the uptrend is in your favor.

That’s what we’re seeing today. So right now, make sure you stay long.

Today, Stansberry Research cryptocurrency expert, Eric Wade will answer several common questions to help you better understand this space. If you want to make money in cryptos, you need to know the basics first...

(SSR): What It Is and What You Need to Know

What we call the SSR today is different from the original version in effect from 1938 to 2007. It’s good to understand why it started, why it was abandoned, and why a new version was established.

Creating a Mindset for Success

The stock market may not have emotions, but as a person, you do. In this post, I’ll educate you on what trading psychology is and offer several tips for how to mentally prepare yourself to trade with a level head.

These Stock are Fast Moving with BIG $$ Potential

In this issue, I’ll go over the benefits of trading small-cap stocks, and why you should consider adding them to your stock portfolio.

A Market Phenomenon You’re Misinterpreting and Missing Out on

In a deep dive lesson on stock splitting, come to understand all you need to know about a relatively rare, but extremely important market phenomenon.

Mobile trading has allowed me to be able to trade from anywhere. So here’s what your favorite penny stock trader has been up to lately…