Forget asking somebody Snoop-Dogg style — I’m going to tell you right now: healthcare has been a major laggard this year.

As I researched the answer to that question for today’s column, I uncovered a timely and burgeoning new trend that everyone should be positioning their portfolios to profit from

Simply put, it’s time to buy one of the worst-performing sectors. Now let me tell you why…

Don’t Call It a Comeback!

I’m obviously going for as many 1990s hip-hop references as I can in a single financial column. (Don’t hate!)

But now, getting back to healthcare — what’s obvious about this sector is this: the pandemic completely disrupted all semblance of normalcy

Many healthcare providers were forced to do nothing but treat COVID-19 patients.

But lo and behold, we’re (finally) coming out of the pandemic.

Case in point: the rate of hospitalizations in the US keeps plummeting. 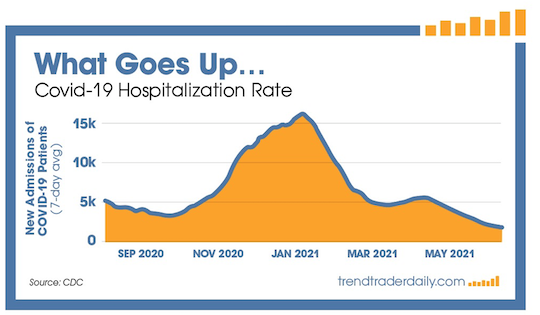 With a countrywide-reopening underway, a return to normalcy for the sector beckons.

And that’s nothing but a bullish development.

One major consequence of the pandemic was the need to put most other healthcare services on hold for 15 months to free up vital resources to save people’s lives.

In other words, there’s a massive backlog of pent-up demand for routine healthcare services, which is now about to be released.

This is a worldwide phenomenon, too.

In England, for example, 136,200 patients had been waiting 13 weeks or more for tests at the end of April. That’s more than four times the number of backlogged patients from a year earlier.

In other words, a major headwind is turning into a tailwind.

A second major headwind is simultaneously turning into a tailwind, too.

I’m talking about the Supreme Court’s decision this month to uphold the Affordable Care Act — again.

This marks the third, and by all estimations, last challenge to the law.

The result? Concerns overhanging the industry about universal access to healthcare and, more importantly, reimbursement are about to fade into the background.

So, against this suddenly bullish backdrop, is it time to scoop up shares of hospital operators? Hell no!

Much like grocery stores, the hospital space survives on notoriously thin profit margins – four to six percent, based on American Hospital Association data going back all the way to 1981.

And if you can believe it, during the pandemic those margins crashed even lower.

A report from healthcare consulting firm Kaufman Hall revealed that the average hospital operating margins were barely positive in 2020 at 0.3%.

Even if we add in government funding from the CARES Act, it still was abysmally low at 2.7%.

(Newsflash: That’s all we’re after here.)

But now for the good news: I’ve found an under-the-radar micro-cap healthcare stock that’s setting itself apart from the industry malaise.

Instead of operating hospitals itself, it provides vital services to hospital operators to help them improve profitability — and this solves a massive $3 billion problem.

Best of all, it boasts a coveted recurring revenue, software-as-a-service (SaaS) model, which comes with some of the highest gross margins in the world at 80%+.

The Exact Details of the Power Gauge

I’ve had a lot of questions from my readers about margin and I want to dive a little deeper into margin and answer those questions.

Holiday trading season is upon us, with short trading days, high volatility and short squeezes and newbie traders gambling with the market, it can be a great time to find easy profits, or step back and study up.

How to Pick Stocks the “New Way”

People keep asking how I spot my trades so quickly. First, I don’t nail every opportunity. I misjudge sometimes — that’s part of trading. But it’s not rocket science. It really comes down to a few very basic ideas. I could say it in six words…

If you are committed to trading penny stocks one of the most important things to include in your analysis is the float. Low float stocks can be very volatile, which means that if you get ahead of the curve you can use that volatility to make a profit.

Are You Using the Sykes Sliding Scale?

Once you’ve finished with your barbecues and cook outs, come back to this and finish reading up on my eight tips for quickly cutting your losses.