The Next Big Tech Trend is Here

Move over Goldman Sachs — there’s a new “great vampire squid wrapped around the face of humanity, relentlessly jamming its blood funnel into anything that smells like money,” as Rolling Stone famously put it.

I’m talking about none other than Jeff Bezos’ Amazon.com, Inc. (AMZN).

In recent weeks, the company has made at least three bold moves into new markets to suck even more money into its online retailing machine.

This includes an expansion into telehealth services, pharmacies, and the most aggressive of all — an $8.5 billion acquisition of MGM studios.

And now, here’s why you should care about all this…

(Hint: There’s way more to it than simply a bullish call on Amazon’s stock.)

Stick to the A’s

As I shared recently, not all FAANG stocks are created equal.

Apple Inc. (AAPL) and Amazon stand out above the rest because of their ability to leverage massive, loyal customer bases to expand into new business lines with ease.

Sorry, but Facebook (FB), Alphabet (GOOG), and Netflix Inc. (NFLX) are nothing but one-trick ponies… and they always will be.

Even though it is facing scrutiny from the FTC, Amazon’s latest land grab in streaming represents the latest proof of its superiority…

You see, you might not realize this, but by purchasing MGM, Amazon instantly gained access to a streaming library of 4,000 films and 17,000 shows in a single deal.

Rest assured, in streaming, content remains king. With so many new entrants, simply licensing content is no longer a viable strategy to dominate the market.

But now Amazon doesn’t have to worry about licensing content, as it directly owns some seriously valuable crown jewels, including the James Bond and Rocky franchises, the reality program “Shark Tank,” and the dramas “The Handmaid’s Tale,” among others.

Add in its current 200 million Prime users, and Amazon ranks as a serious competitor to the current streaming leader Netflix, which boasts only a slightly larger user base of 208 million users.

As I shared during my recent Fox News appearance, the Whole Foods acquisition paved the way for Amazon to enter the pharmacy space by providing 500 brick-and-mortar locations. 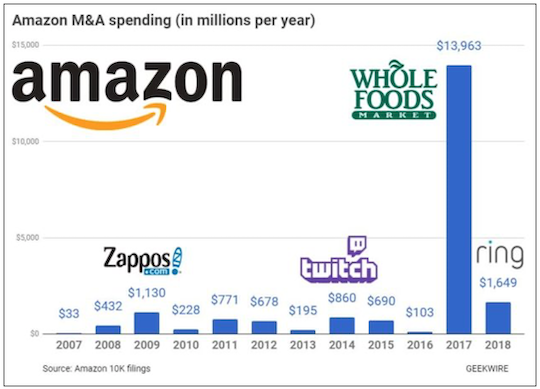 That’s the key: Amazon only makes big purchases when it opens up major expansion opportunities. The MGM deal is no different.

You see, it’s not just about avoiding having to license the MGM library. It’s about leveraging that content to build even more content.

Or as Amazon’s senior vice president of Prime Video and Amazon Studios, Mike Hopkins said, “The real financial value behind this deal is the treasure trove of IP in the deep catalog that we plan to reimagine and develop together with MGM’s talented team.”

Of course, you’re not here for me to tell you to buy Amazon — or Apple or Netflix, for that matter.

You expect investment trends and takeaways from me that are original, not just a simple suggestion to “buy mega-cap tech stocks.”

So here it is…

Buy It Versus Build It

It’s always been easier and quicker to buy it on Wall Street than to build it in the real world.

Or more simply, whatever the industry, acquisitions represent the instant strategic fix for a company to become more competitive.

What’s more, digitization and the digital fast-forward prompted by the pandemic opened the door for tech companies to dominate new markets in ways not previously considered.

Case in point — Amazon’s purchase of MGM is the first time a tech company has ever owned a Hollywood studio.

Bottom line: Look for Big Tech to keep getting bigger in unexpected ways. And for us as investors, that means it’s high time to start identifying the most likely takeover targets in advance.

Stay tuned, as I plan to share several such targets in the next week or so.

Old Wall Street Is Reeling: What to Do in the GME Aftermath

Editor of Green Zone Fortunes, Charles Sizemore shares how Wall Street doesn’t have the information advantage it used to. “The idea that Wall Street can manage things as they used to is ridiculous at this point. So, what should we do about it?”

Doing your homework is crucial to your success as an investor. But having the right tools at your disposal makes the job a thousand times more effective and easier to boot.

3 Steps to Finding This Kind of Stock

Congrats — you made it to the end of the lesson! Now I’ll wrap this all up in a nice, tidy package for you…

10 Quotes To Inspire You To Become A Better Trader

You need the right mentality before you can expect to become wealthy…90% of traders lose because they don’t do this...Disney, Hill, MJ, Einsten and others to help motivate you to greatness...

9 Tips for the Early Bird Trader

If you’re thinking of trying pre-market trading, make sure you first learn a ton about the process. These 9 guidelines have been helpful for my trading.

Where Does the Market Go From Here?

A lot of people have been asking me, “Where does the market go from here?” My response is real simple. I don’t care, and neither should you!