Remember that biotech resurgence I told you to expect at the end of April?

Well, it’s happening — and it’s an urgent trend that requires your immediate attention and investment.

The only problem, of course, is trying to figure out what biotech stocks to buy out of the roughly 700 available on major exchanges.

But fear not. Today, I’m stepping in with an easy-to-use tool to help you find only the most compelling biotech stocks.

Before I get to it, though, I first need to prove this boom isn’t about to go bust any time soon…

All We Need is a Spark

As I shared two weeks ago, sentiment always matters. And a single event or data point can spark a major change in market direction.

That happened on June 7, when the FDA approved the first drug in 20 years to treat Alzheimer’s disease.

Here’s the chart I shared to prove it… 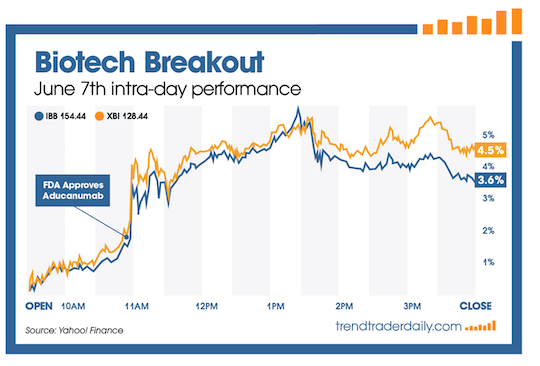 At the time, I also told you that this resurgence in biotech bullishness wouldn’t be short-lived. And it wasn’t!

Look no further than the IPO market for the additional confirmation.

As Endpoints News’ Max Gelman noted, it was “one of the busiest [biotech] IPO weeks of the year.”

Indeed. And that doesn’t happen if the “smart money” isn’t bullish in the short- and long-term. That’s clearly the signal they’re sending with their capital.

Consider: Year-to-date, biotech IPOs have collectively raised close to $9 billion, according to Endpoints’ tally. And that doesn’t include nearly $15 billion raised via SPACs focusing on biotech. 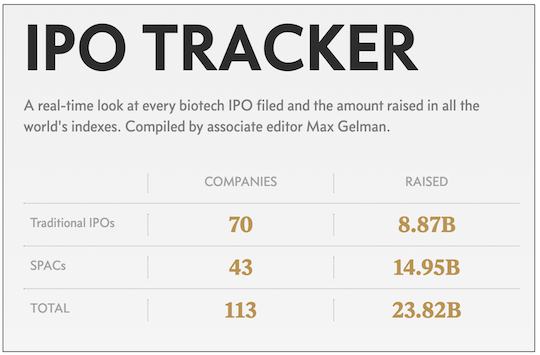 “With the end of the second quarter rapidly approaching,” notes Gelman, “the industry is well on its way to eclipsing 2020’s record IPO figures.”

Of course, a boatload of newly public biotech companies means there are more and more choices for everyday investors. And sorting out the promising biotechs from the most promising ones keeps getting harder.

All great companies have some form of financial backing.

For example, for decades, Warren Buffett has been heralded as the premier financier. And throngs of investors have simply followed his lead and earned market-beating returns.

In the case of biotech companies, they’re often backed by venture capitalists first and then other private funds. Both groups are typically off limits to everyday investors like us.

You see, just like we can track Buffett’s moves, we can track the moves of the smartest investors in biotech.

For example, I track the investments of a biotech fund called RA Capital Management.

Here’s the thing: over the course of my career, I’ve compiled a list of other super successful biotech investors, which I’m including below. 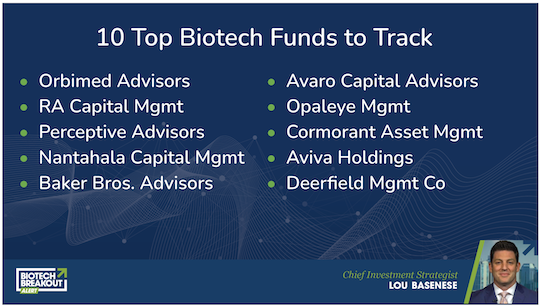 Thanks to SEC regulations, these funds must disclose all their trading activity every quarter – new purchases, additions, and sales via Form 13-F.

And we can track these filings at sec.gov or via specialized websites like whalewisdom.com.

Now, it’s true these filings aren’t required until 45 days after the end of each quarter, meaning there’s a delay in us following the moves of the smartest biotech investors.

But it doesn’t matter.

You see, most biotech stocks don’t just blast-off within 45 days of investment by these funds.

Since these funds need to buy such large stakes, they typically get positioned earlier, ahead of key catalysts, building positions over time.

That leaves us plenty of time to…

Bottom line: You’re now armed with a list of top biotech investors. And now, in an instant, you can track them to dramatically reduce the universe of biotech stocks down to a handful of the most promising ones. And in about 45 days from now, we’ll get a fresh batch of 13-F filings. So get ready!

Great Stuff editor, Joseph Hargett shares how the stock market can continue to hit new all-time highs when the economy is in shambles. “You must be a long-term realist and a short-term opportunist.”

Have You Paid Your Market Tuition?

Learning how to trade has a cost. A tuition cost if you will. That cost varies from trader to trader, but each one of us has to pay it before we can be successful traders.

My Secret to Finding Your Perfect Brokerage

If you are looking to day trade, you are going to need a brokerage that allows you to trade when you want, at a price you are willing to pay. I’ll give you my insight on what to look for, what to avoid, and some good companies to check out.

5 Ways to Benefit from This Strategy

Now that you understand binary options basics and the different factors between them, you might be wondering whether this type of trading aligns with your investment goals. Let’s weigh the pros and cons.

The Top Sectors to Invest In

Why is earnings season important? Because this period can create a huge opportunity for investors and traders to take advantage of significant stock runs that occur as a result of these earnings releases. The bottom line is that you must pay attention closely to this period.

As we enter the end of the year, there is no better time than now to study up and get ready to get after it in 2020.

Trend Trader Daily editor, Lou Basenese discusses a timely and burgeoning new trend that everyone should be positioning their portfolios to profit from.