We’ve seen this happen five other times since 2009.

It’s an exodus of sorts. And if you were paying attention when it happened, you could have made double-digit gains over the next year.

I’m talking about investors giving up on a certain stock market. They have been fleeing this market for most of the year.

Now, sentiment is lower than the hated levels we saw in 2018.

Again, we’ve seen situations like this five other times since 2009. And each time, it has led to gains over the next year… some as high as 40%.

The U.S. stock market is doing incredibly well. But it’s not the only game in town.

It’s always worth considering investing some of your portfolio overseas. And right now, you have a fantastic opportunity to do that in France.

You see, investors have given up on this market in a big way. And that means French stocks have big upside potential.

The iShares MSCI France Fund (EWQ) has been liquidating shares for the past few months. Longtime readers are familiar with how exchange-traded funds like EWQ can adjust their shares outstanding based on investor demand…

If investors are in love with French stocks, EWQ creates new shares to meet demand. And if folks are heading for the exits, the fund liquidates shares. This unique feature makes the fund a great gauge of investor sentiment.

Today, folks want nothing to do with French stocks. Take a look… 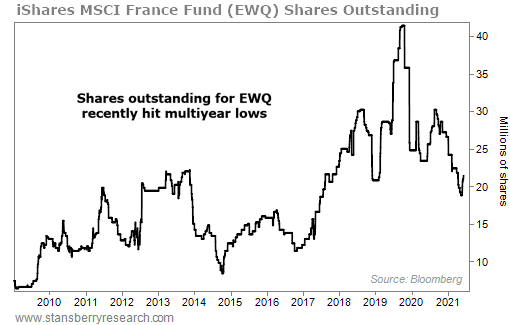 EWQ’s shares outstanding are down 19% so far this year. That’s one of the lowest levels in four years. And history shows that it could be a strong buy signal.

Again, this kind of setup has happened five other times in a little more than a decade. Each time led to positive results over the following year. Check it out… 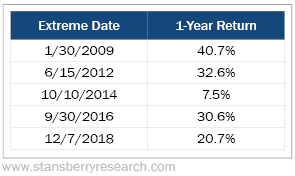 Historically, folks have given up on French stocks at the worst possible times…

In 2009, EWQ’s shares outstanding were at a multiyear low. Sentiment bottomed in January. Investors wanted nothing to do with this market. Then, French stocks took off…

EWQ rallied 41% from January 2009 through January 2010. Those who bought back in could have made big gains.

We saw a similar setup happen again just a few years later. French stocks fell 26% from June 2011 into June 2012. Investors bailed on the way down. By mid-June 2012, sentiment was back at multiyear lows. But instead of selling back then, the right call was to be a buyer… EWQ rallied 33% over the next year.

This pattern happened three more times between 2012 and 2018. Each time led to gains for investors who bought when everyone else was heading for the exits. And most of those occasions led to double-digit gains.

This is an obvious setup. But investors who focus only on the U.S. will miss it entirely.

If you’re interested in moving some money overseas, then buying French stocks through shares of EWQ is a great opportunity right now. Check it out.

5 Ways To Prepare For Any Market Environment

Extreme Value editor, Dan Ferris shares five simple strategies that can help you make sure you’re ready for anything as an investor. “Today, I'll discuss how to manage your portfolio in the face of uncertainty. Instead of relying on predictions, you can be ready for anything in the markets this year.”

If You’re a Day Trader, You Need to Consider This

In this post, you’ll learn the art of using day trading strategies for trading options, including how to approach the market, considerations to keep in mind, and how to find strong contenders for trades.

The latest to capture traders’ collective attention? Beyond Meat, a purveyor of faux-meat products that claim to be “the future of protein.”

The Growth Stock Rebound Is Just Getting Started

How THIS Type of Stock Can Improve Your Strategy

How to identify high volume stocks and how researching and investing in them can improve your trading strategy.