Call It a (Biotech) Comeback!

Sorry, LL Cool J. But I’m calling this a comeback!

On the heels of the recent historic decision by the FDA to approve the first drug in 20 years to treat Alzheimer’s disease, forget about Biogen’s (BIIB) stock rally… all biotech stocks rallied big! 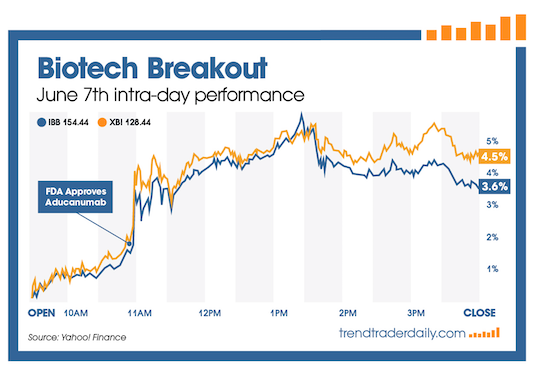 The thing is, this isn’t some one-off, short-lived celebration.

On the contrary, I’m convinced this is the start of a rally with serious staying power.

You’ll recall, I recently told you we were about to enter a historically strong performance season for biotechs.

For five years in a row, from the end of Spring to the end of Summer, biotech stocks have rallied by double digits.

In other words, the old market adage to “Sell in May and Go Away” should never be applied to biotechs. At least according to yours truly.

Up until yesterday, that seasonal strength had failed to materialize, making me look like a bullish blowhard.

Case in point: The major biotech indexes were down several percentage points in May.

What a difference a day makes, though.

After yesterday’s move, the major biotech indexes are now up nearly 5% from the end of May.

As you’ll also note, yesterday’s rally was more pronounced for smaller-cap biotech stocks, as represented by the SPDR S&P Biotech ETF (XBI), which is something I also told you to expect.

When it comes to investing, we know a single event or data point can spark a change in sentiment and market direction.

That’s why so many investors obsess over individual events or data points, like Fed meetings and jobs numbers, to name two quick examples.

Well, it’s no different in biotech.

Single FDA decisions or clinical trial data points can change investor sentiment — and in turn, change the direction for the entire sector. And that’s precisely what happened yesterday.

For months now, investors have been overly worried about drug price reform and lower odds for drug approvals under new leadership in the White House and the FDA.

But with a single approval yesterday, those fears have been erased, letting the truly bullish biotech fundamentals that I mentioned in April come back into focus and influence price action.

And those fundamentals, my friends, are ones with serious staying power. Like strong clinical data and record levels of venture capital funding, which make yesterday’s biotech rally the start of a longer-term trend we can profit from.

If you don’t own any biotech stocks right now, you better hurry up before it’s too late!

Money & Markets research analyst, Matt Clark shares the perfect stock to return three times the overall market in 12 months. “This stock will outperform the market... and it will capitalize on the converging trends of renewable energy and infrastructure spending.”

The Biggest News in Digital Payments

The pandemic is proving to be the biggest catalyst for the adoption of contactless payment solutions. Or essentially, digital money. Initially, uptake was slow because of a lack of consumer awareness and trust. Then the pandemic literally forced adoption, as everyone needed to avoid physical contact as much as possible. Whether they trusted contactless or not. And now, Trend Trader Daily editor, Lou Basenese shares the latest data proving just how much the pandemic accelerated this shift… and how YOU can profit from it.

3 Questions for Choosing the Best Trades

Low float stocks can provide many opportunities for traders. However, because they have a high level of inherent risk, it’s important to do plenty of research on potential plays before executing trades.

The Best Broker for Day Traders Isn’t Who You Think

If you are looking to day trade, you are going to need a brokerage that allows you to trade when you want, at a price you are willing to pay. I’ll give you my insight on what to look for, what to avoid, and some good companies to check out.

It’s Time to Cut Your Losses

With the market volatility soaring, I thought now would be a good time to review my number one rule, and why it is so crucially important for all traders.

The Best Way to Develop Your Watchlist

A stock watchlist is an essential part of your trading routine. Create the daily habit of updating the list. Use the tips in this article. Be part of an elite group of traders with the dedication to achieve financial freedom.