[Charts] Hate the Player, Not All the FAANG Stocks

For the regulars here, you know that means it’s time for me to zip my lips, and let the pretty pictures do the talking instead.

This week, I’m dishing on the persistence of Apple Inc. (AAPL) haters, as well as a different FAANG stock that isn’t performing so well.

So grab a fresh cup of Joe, sit back, and prepare to be visually informed!

Cupertino, We Have a Problem…

They say it’s been too successful (not a typo!) in turning its installed base of devices into a recurring revenue machine. 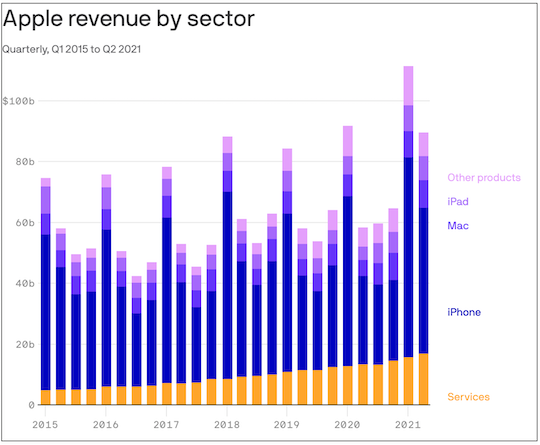 Mind you, before Apple’s Services segment really ramped up, there were critics, too.

Not me, as I predicted years in advance that Apple would become the world’s first trillion-dollar company, largely because of the division.

But who’s keeping track? Me… and Tim Cook, hopefully.

Ever since he took over for the iconic Steve Jobs, he’s faced haters. But as I said long ago, the haters need to step off, because the end-results speak for themselves.

Stand up, point at the scoreboard, and sit back down, Timmy-boy.

Anyone betting against you doesn’t know what they’re doing.

But What About Bezos?

If we can’t hate Cook and his company’s stock, should we focus instead on another icon of tech, Jeff Bezos?

After all, shares of Amazon have been trading sideways ever since the pandemic started to subside. And that’s after doubling when it started because, well, Amazon became the only way to get anything.

In short, in the words of Ice Cube, I’d “Chickity-check yo self before you wreck yo self” here, too.

Sure, the stock’s currently trading in a range of less than 25% for 200 trading days and counting and seems stuck in the mud.

But as Bespoke Investment Group’s analysis notes, all four times the stock traded in this tight of a range, shares eventually broke out. In a big way. By an average of 68% over the next year, to be exact. 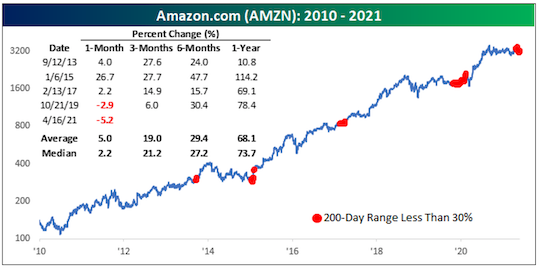 If I were you, I wouldn’t bet against either of these Big Tech stocks. Ever. But it’s a free country, so feel free to do otherwise.

Enjoy the weekend, and we’ll be back at it on the flip side.

Today, Stansberry Research financial expert Chris Igou joins us at Wall Street Daily. He explains how we could see strong outperformance in European stocks over the next year and why this is great news for investors.

OK, after yesterday, you now you understand the basic types of options and how they work. If you’re interested in pursuing them, how can you find good potential options trades? Here are some techniques for your arsenal and things to consider when choosing options…

Not Trading on THESE Apps? What you Could be Missing

This issue outlines some of the best trading platforms available for your mobile devices.

The Only Way You Can Afford to Think in 2020

5 Ways To Prepare For Any Market Environment

Extreme Value editor, Dan Ferris shares five simple strategies that can help you make sure you’re ready for anything as an investor. “Today, I'll discuss how to manage your portfolio in the face of uncertainty. Instead of relying on predictions, you can be ready for anything in the markets this year.”

Trend Trader Daily editor, Lou Basenese discusses a timely and burgeoning new trend that everyone should be positioning their portfolios to profit from.

I’ve been reading stock quotes for decades now, but I still get surprised when a company’s stock moves differently from what the stock quote leads me to predict. That instability makes trading more fun.