“Based on the bearish Power Gauge rating, I think the risk of a negative earnings surprise is too great.”

I said those words in 2012… as I was appearing, for the first time, on CNBC’s Fast Money Halftime Report.

On the panel next to me was Jon Najarian. I’m guessing you’ve heard of him…

The NFL-linebacker-turned-high-profile-trader had become a household name in the financial world by then. He would go on to sell his publishing and trading platforms, optionMONSTER and tradeMONSTER, to E-Trade just a few years later… for $750 million.

He was at the peak of his financial career. And although I’d been making the rounds on CNBC, this was the first time we had crossed paths.

The stock we were talking about was online travel agency Priceline (which later changed its name to Booking Holdings). It was one of Jon’s bullish trades at the time. And I had just told CNBC viewers that it looked too risky…

The thing is, I didn’t know anything about Priceline. But I did have the Power Gauge to guide me. And that was all I needed…

The Power Gauge is the culmination of my life’s work. It combines more than 56 years of data-driven market research. And it packages everything I’ve learned about the markets into actionable information for every stock it processes.

So, I didn’t need to know much about Priceline. I simply typed in the ticker and got my report.

Instantaneously, I was able to see that Priceline was set up to release disappointing earnings. The Power Gauge made it clear. 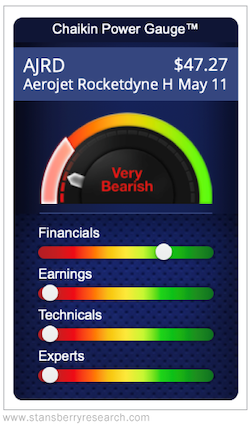 You’ve probably never heard of Aerojet Rocketdyne (AJRD). But that’s not important – because the Power Gauge has.

Each of these sliders is backed by data that can be further explored. And the data shows us that AJRD is in a risky spot for investors right now.

That was the kind of setup I saw when I told Jon Najarian – one of the most famous traders in finance at the time – that Priceline looked like a no-go. The Power Gauge had provided me with the most important (and most relevant) information.

Again, Jon was excited about the stock. But he was a professional. And that means he was willing to re-examine his ideas.

The interview ended with Jon saying, “I’m going to take a harder look, since Marc Chaikin doesn’t like it.”

That was Monday, August 6, 2012. On Wednesday, the day after Priceline’s earnings, the Halftime Report did a highly unusual follow-up.

The host started by asking Jon, “Chaikin spooked you a little bit?”

“He did indeed. And I think [… ] a lot of folks followed Mr. Chaikin. Those of us that picked up some cheap out-of-the-money puts [… ] well, they worked out like a charm.

In short, the Power Gauge was right. Priceline missed earnings. And Jon listened to it, made a bearish bet, and racked up big profits instead of taking major losses.

Now, one great call is just that… a single great call. But it was only possible because I had the Power Gauge at my side.

The Power Gauge uses the best data available to help individual investors make consistently great calls. And my goal is to share that power with as many investors as I can.

I’ll share more on how it works in the coming days.

The Only “Patented” Way to Profit from Tech Stocks

Marc Chaikin has done it all on Wall Street... He started as a broker more than five decades ago. He's worked as an analyst. And he's built quantitative models that the financial elite use to make buy and sell decisions every day.

Eventually, Marc decided he was done helping the rich folks on the Street...

When is Bigger Actually Better?

Penny stock trading isn’t for everyone. If you are the sort of person who wants to trade stocks with lower volatility, and slowly grow your wealth over time, then you should look into this type of stock.

Why Keeping a Journal Isn’t Optional

5 Things You Need to Do Before Every. Single. Trade.

Good Trading starts with good research. Unfortunately, most starting traders don’t have the first clue about how to do good research. Here are 5 tips to help you do your research right.

Here are just a few of the many “secret” benefits of trading penny stocks that you may not have known...

Now that you have the first steps under your belt, here are a few more advanced steps that you’ll need before you begin on Monday.

Sell Your Tech Stocks? Answer This Simple Question To Find Out

Trend Trader Daily editor, Lou Basenese shares how he personally times his tech investments. “Determining whether a technology or service will ever make it into the mainstream comes down to answering a basic but vital question…”