The Craze in Housing Isn’t Fueled by Mania

We now have more realtors out there than houses for sale…

Seriously. As of January, the National Association of Realtors reported that there were roughly 1 million homes on the market. And there were nearly 1.5 million realtors out there to sell them.

Numbers like that seem to paint a clear picture… that the housing market is out of control.

That’s not really the case though, as I explained yesterday. The market might seem too hot. But we’re in the midst of a sentiment misfire.

That’s right… This is one of the rare times when I’m going to tell you, “Pay a little less attention to the crowd.”

The heat we’re seeing in the housing market isn’t driven by wild and unsustainable speculation. It’s driven by basic economics. That’s why I know there’s a lot more room for growth.

Today, I’ll share how we got here. And I’ll show you why the situation won’t end soon…

Seemingly infinite buyers… and few homes to go around. That’s the situation in housing right now. This didn’t just creep up on us overnight, either…

Homebuilders have been off their game since the Great Recession hit in 2008 and 2009. They haven’t kept up with demand.

Despite that, the mainstream media chronically misrepresents this story. They make the buying frenzy about market euphoria.

It’s also true that homebuilders are putting up new homes at the fastest rate since the Great Recession. But a lot of folks say that’s another sign of mania. One look at the long-term data reveals the problem with that framing…

Here we see what the U.S. Department of Housing and Urban Development describes as “new housing starts.” It’s the annual rate of new homes in construction each month. Take a look… 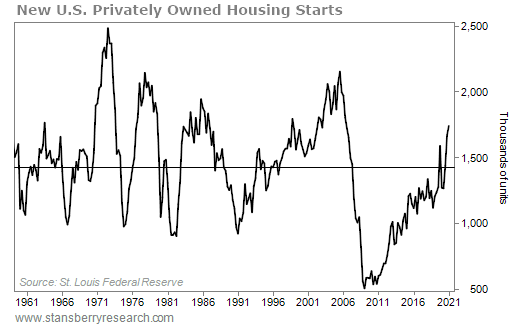 Just by looking – no special tools needed – we can see that housing starts have been low for a long time. It’s much crazier than that, though…

U.S. housing starts first dipped below their long-term average (the horizontal line on the chart above) in 2007. And they stayed below that average for 149 consecutive months – roughly 12.5 years.

For most of the last decade, there were plenty of existing homes on the market to fill demand. Now, those existing homes have filled up. And homebuilders have only recently kicked new builds back into gear.

It’s no wonder prices are booming in residential housing. Americans are competing in one of the tightest housing markets on record.

So don’t let the market sentiment fool you. It might feel like we’re in a mania. But as you’ve seen, we’re just in a very tight market. And that means that the craziness happening today doesn’t have to end soon. If anything, it’s surprising that it took us so long to get to this point.

Simply put, this crazy housing market isn’t over yet… It’ll likely last longer than anyone imagines.

The Exact Details of the Power Gauge

Spotting a Dead Cat Bounce… Yes You Read That Right

How to recognize and capitalize on the dead cat bounce phenomenon.

I Used This Strategy to Make Millions… You Could Too

Day trading and penny stock trading go hand in hand. So if you want to make money like I’ve done, you need to know how to set yourself up for success when day trading.

Making Money in a Volatile Markets

Many traders curse volatile markets for their unpredictability. Not me. I thrive in unpredictable markets, and you can too! But first you need to understand them.

Don’t Be Left Behind. Do THIS Instead…

The stock market is an ever changing environment, if you aren’t careful you will be left behind. You need to learn to change your trading strategy so that you can always be ahead of the curve.

Dear Wall Street Daily Reader, For the better part of 18 months now, I’ve been banging the table on biotech stocks — and it’s paid handsome dividends. But one reader recently challenged me on this… “It’s easy for you to say, ‘Buy biotech!’ and then find compelling biotech companies because you’re an analyst. It’s not...

From Normal High Schooler, to a Multi-Millionaire

You might not know exactly where your trading journey will take you, it can be a wild ride. It certainly was for me, but if you stick with it, incredible things beyond just great trades can happen. The world can open up in ways far beyond your wildest dreams.