As I explained on Tuesday, these folks are jumping in headfirst. Their goal is to rake in the “easy money” they see so many others collecting right now.

When a market Melt Up truly gets underway, life-changing gains become much more common. And it helps drive the mania.

So now, we have more people chasing that dream than we’ve seen in our lifetimes. This is setting up the final inning of today’s Melt Up. And it’s sending cash pouring into U.S. stocks.

According to recent data from Bank of America, this new money is pouring into the market. As an article from news service Reuters noted last month…

Equity funds have attracted more than half a trillion dollars in the past five months, exceeding inflows recorded over the previous 12 years, according to data from BofA, which has likened the stampede to a “melt-up” in markets.

Yes – the article even gives a nod to the idea that this is signaling a Melt Up. And it’s absolutely right…

The data shows that more than $570 billion has poured into these funds since November. That’s more than the $452 billion seen in the last 12 years combined.

This is exactly what we want to see play out in a Melt Up.

More folks are trading stocks than ever before. The S&P 500 Index has nearly doubled from its March 2020 bottom. And new investors don’t want to miss what could be next… They’re piling in at an incredible pace to avoid missing out on any potential future gains.

The markets are getting kooky. But the craziness doesn’t stop there…

You see, investors are partially funding this buying frenzy by using record amounts of leverage…

Investors had borrowed $814 billion against their portfolios as of late February, according to data from the Financial Industry Regulatory Authority (“FINRA”).

You can see what I mean by looking at “total margin debt.” Folks take on margin debt from their brokerages to buy stocks and other securities.

A brokerage can lend up to 50% of the initial investment. And the account holder uses the securities he owns as collateral for the loan.

During a bull market, margin debt tends to rise. That makes sense… As the value of securities goes up, investors can borrow more money to buy even more securities.

But today’s levels are well above just a steady increase. Look at the chart below… 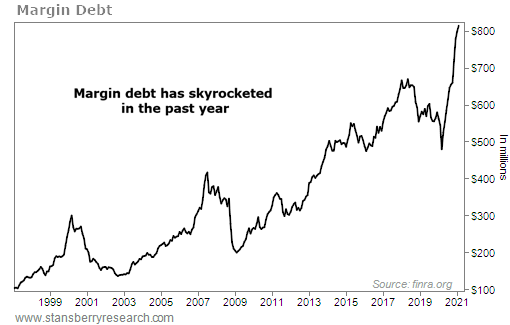 Notice the most recent spike in the upper-right corner of the chart. Total margin debt is up an incredible 49% over the prior year.

Importantly, this kind of jump in borrowing happened near the end of two other major bull runs… The most recent jump happened back in 2007 before the financial crisis. And the other jump occurred during the Melt Up of 1999.

Folks use leverage like this to boost their upside potential.

But adding the extra leverage doesn’t come without added risk…

When a bear market arrives – and it always does – the ensuing value loss in securities will trigger “margin calls.”

That means folks who borrowed from their brokerages will need to add more cash to their accounts as the value of the securities they hold decreases. If they can’t meet the margin calls, brokerages can liquidate other positions in their accounts to recoup the loans.

Today, stocks are heading higher. That means the extra leverage is helping these new investors to boost their gains and drive the Melt Up. But eventually, the tide will turn against them… And when that happens, it could lead to painful losses on the flip side.

I’m not here to scare you off, though…

Remember, this is exactly what we want to see during a Melt Up. The big gains at the end of a Melt Up are possible thanks to the kind of euphoria we’re seeing in the markets today.

New traders are here. They’re buying big. And they’re even using leverage. That’ll fuel the Melt Up in the coming months. And as long as the trend remains in place, it means we want to stay long.

How Many of These 12 Millionaire Habits Do You Have?

Here are eight habits of successful people--millionaire habits. Read through to find out how many you already possess, how many you need to work on, and learn why each trait will help you in your journey to become a millionaire.

This question comes up pretty often: “Hey Tim, what are the top times to trade?” or “When do you like to trade?”

The Secret to Developing Your Penny Stock Mindset

Yesterday I introduced you to the 10 steps to succeed with pennystocking. This guide I am providing you with, is long and in-depth. It’ll give you everything you need to become a penny stock master. Let’s jump into the first two, and most important, steps in this issue.

Every Investor Should Know About This…

Fundamentals about investing that every trader should know by heart.

Get In On Game Changing Augmented Reality Shares

Trend Trader Daily editor, Lou Basenese maps out the path to profitable augmented reality shares. “This stock is currently under-the-radar. But it won’t stay that way for long. Here’s why…”