The Secret to Tech Investing

In my 30 years of actively following the markets, I’ve seen trends come and go.

(In fact, there is one trend I am following now. One that could give early investors a huge profit. Click here for the details.)

Or fail and get tossed to the side by investors.

If you would have invested in Blockbuster in the 90s, you would have struck gold, as it was the number one video rental store in the whole of the United States.

But as time passed they refused to adapt to the world around them, even denying to buy out a fledgling DVD mail-in company called “Netflix” in the early 2000s.

The rest is history as shown in the two charts below… 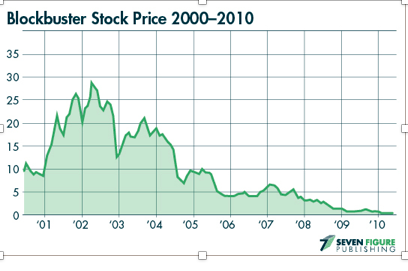 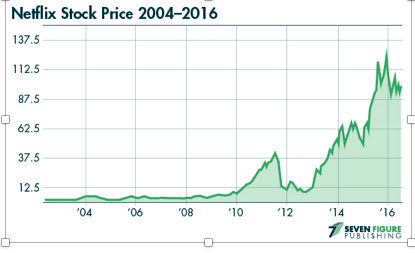 Blockbuster failed from a mixture between a lack of innovation and refusal to adapt to the world around them. Blockbuster stores when they officially all closed in 2014 were hardly different than the ones you would see in the mid-90s.

Sure they tried different methods to save their sinking ship like, store credit cards or different promotional runs…

But the core of their business never changed. And today they’re just a memory of a time since past.

So the question is then, what makes a good tech company? And what’s the secret to investing in the right one?

Regardless of the company, though…

There’s one rule that I follow when investing in tech, and it’s served me well over my entire career…

You do well by doing good.

I only invest in companies that are going to do some good for the world.

30 years ago, investors like you or me could barely scratch the surface of the stock market.

And if you wanted to invest in a small company with a big idea for the world, you’d have to pay enormous fees through calling your broker.

Nowadays, it’s as simple as two clicks of a button online.

And because of this, small companies with big ideas can get funding without having to rely upon big institutional money buying them out or granting them large stipends.

Of course that always helps, but to get their feet under them, they don’t have to completely rely upon these companies.

They rely on investors like you that believe in their product.

Furthermore, companies like Starlink are keeping their promise of bringing broadband to areas of the world in broadband dead zones. And the space program was revived alongside the launch of SpaceX’s Dragon — bringing the launches home from Russia.

Electric Vehicle companies are creating a cleaner, cheaper way to travel. And to go even further, Tesla and other companies are using their battery technology to bring backup energy to places like Australia that have had serious issues with fluctuating power outages.

And if that’s not enough, let’s look at what tech companies have done in the wake of COVID-19 — specifically biotech.

The novel coronavirus has eluded scientists for many years before the pandemic, as it was tough to nail down with normal vaccine technology.

And yet, faced with this adversity, we not only have one working vaccine, but nearly half a dozen.

With this too, Moderna and Pfizer have cracked the code on two vaccines that are unlike anything else we’ve developed in human history.

Even for targeted cancer cells in patients.

Tech continues to be the best place to put your money because it gives you the chance to do this kind of good for the world.

And when good is done, markets react overwhelmingly positively to the results.

Moderna’s stock for instance at the beginning of 2020 was around $20.

By the end of that year it had reached over $150 and would even go as high as $180 in the following February.

That’s nearly a 10x payout back to you all for investing in the company doing the most good for the world.

So when it comes to finding these companies, that’s where I come in to help.

Not everyone who invests has the time or effort to do their due diligence researching each and every one of these companies.

You can scour the web for interviews, look at their balance sheets or go on what other talking heads are saying.

But when it comes down to it, what product they deliver in the end is key.

And with me, you get a boots on the ground approach to find out if these companies are legitimate.

My approach is to interview people where I can, do my own research and if necessary go to the company themselves to take tours of the facilities to see it for myself.

If I invest in a company, I want to believe in what they’re doing.

I want to believe that they’re going to do the best for the world around them.

And if I can make a quick buck on the way that’s even better.

To a bright future,

Editor of Technology Profits Confidential, Ray Blanco shares his method for successfully investing in the new space race. “It’s still far off its all-time highs after the market’s tumble in 2020 and has a lot of room to grow.”

My Go-To Formula for Calculating Your…

A Market Correction Is a Matter of “When” Not “If”

After my posts last week about how I survived the 2008 Crash, I wanted to go more in depth about what defines a market crash, versus a market correction, and how to use both to your advantage.

I’d Rather Be Pete Rose than Babe Ruth

My trading style is different from many traders. I don’t look for home runs. I’m always looking for solid safe singles. It’s the only way to trade penny stocks long term. Read on and I’ll show you what I mean.

2 Key Indicators to Check Before Trading These Stocks

How THIS Can Line Your Pockets

A rundown on spinoff stocks, and the benefits they present for the parent company, shareholders and potential investors.

London Real and Advice to My 20-Year-Old Self

I did a bunch of interviews while in London, including a two-hour interview for London Real with Brian Rose. It was a crazy, comprehensive interview with lots of lessons. In the interview they asked me what advice I’d give to my 20 year old self, to which I said…