Today we have this past Friday’s issue for the Trend Trader Daily Nation!

That means the longwinded analysis is out. And some carefully selected charts are in.

I’ll shut up now and get to the pretty (and telling) pictures.

Rather than opine on the merits of the expensive exchange operator, here’s a crypto observation I find most telling…

A true investor class is rapidly emerging from the speculator masses.

As you can see below, at the start of the last decade, virtually no one held bitcoin for more than six months, let alone five years. 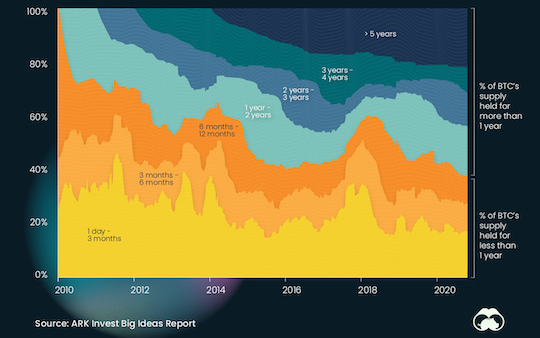 Now? Over 20% of investors have held onto the digital currency for five years or more, and almost 60% have held it for over a year.

While I remain convinced that the market for Bitcoin is frothy (this is an “asset” that represents a limited supply of nothing, yet has some value — head scratcher, I know), one thing’s for sure: bitcoin’s not going away any time soon.

And here are two more things to keep in mind this week: stocks love jobs, and consumers love stimulus checks.

On the heels of a dramatic drop in initial jobless claims, U.S. stocks jumped to record highs. 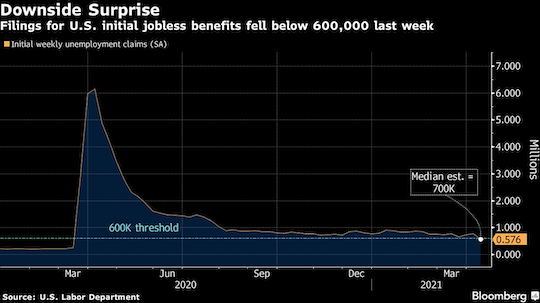 More people back to work means more wages being earned (and spent). And make no mistake, Americans love to spend. Their own money, and other peoples’ money.

Look no further than retail sales. 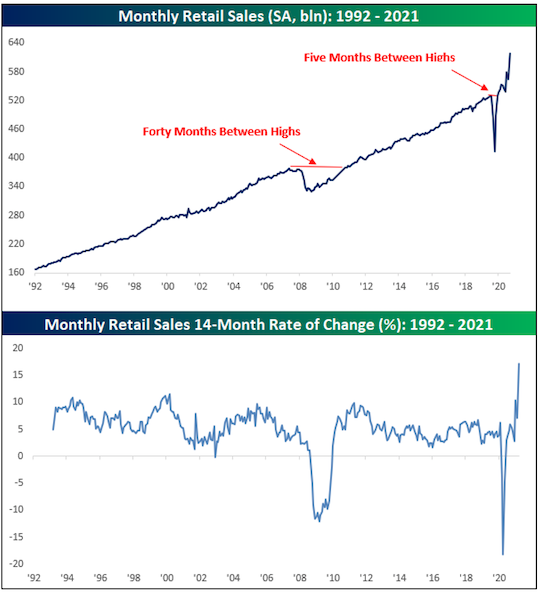 Believe it or not, total retail sales are now above their pre-Covid peak.

Thanks to record stimulus, the rate of return has never been faster, either.

It only took five months to hit new highs versus 40 months during the last major economic slowdown.

Forget about any Johnson & Johnson (JNJ) vaccination slowdown fears getting in the way of the global economic opening. It’s happening!

And it’s time to start positioning our portfolios accordingly.

I’m wrapping up research on my top reopening trade for 2021. So stay tuned!

[Charts] The Next Massive Mania-Trend

Millennial Trader? The Financial Terms you NEED to Know

My first issue of the 26 key financial terms every millennial trader needs to know.

A Fresh Dose of Biotech Perspective

Trend Trader Daily editor, Lou Basenese serve up some fresh perspective on one of his favorite sectors: biotech

My Go-To Formula for Calculating Your…

A Simple Way to Play the Housing Boom

Today, Stansberry Research financial expert Chris Igou joins us at Wall Street Daily. He explains how you can profit from the housing bull market

10 Penny Stocks to You Should Have on Your Watchlist

Penny stocks are starting out the year strong, and there are a few that stand out in the Biotech sector that you should be watching (if you aren’t already).

Right now the coronavirus is making for a hot penny stock sector. Are you ready to take advantage of the plays that are popping up?