JP Morgan is sounding the alarms:

The global markets are about to switch from favoring growth stocks to value stocks.

That’s like predicting the New York Knicks are going to win the NBA title this year. Fat chance after so many years of sucking. And I’m a Knicks fan, so I can say that!

But I don’t want to blindly dismiss the analysis.

After all, it’s founded on reasonable logic and fundamental data. That said, as you’ll see in a moment, it’s a bit premature to make such a bold prediction.

Here’s the lowdown, including what we should be tracking before we start freaking out and repositioning our portfolios…

Signs of Revival and Reflation

Chief global markets strategist Marko Kolanovic believes the rebound in value seen in the chart below is due to several key factors. Namely, the recovery from the pandemic, falling volatility, and unprecedented fiscal and monetary support.

Or, in laymen’s terms, the world’s returning to normal and therefore so will interest rates, which favors cyclical and reflationary investments.

And you guessed it… that’s the category most value stocks fit into currently. 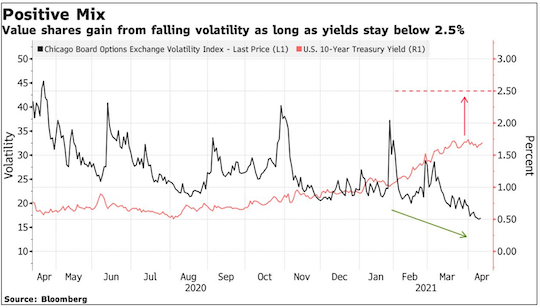 But not so fast, Kolanovic!

The 10-Year treasury yield still remains comfortably below 2.5%. Until it breaches that level, rates are still a tailwind, not headwind, for stocks.

Plus, we’re only talking about three months of low(er) volatility. It can spike back up at a moment’s notice, as proven repeatedly by the black line in the chart above.

Bank on the Banks

To really get an early and definitive read on the next move for the markets, keep an eye on financials and bank stocks.

They’re the purest reopening and reflationary trade around. Why? Because they borrow short-term and lend over longer periods. So the higher yields go, and the steeper the yield curve gets, the more money banks stand to earn.

Not surprisingly, banks nearly top the list for the biggest contributor to revisions to global earnings estimates for 2021. 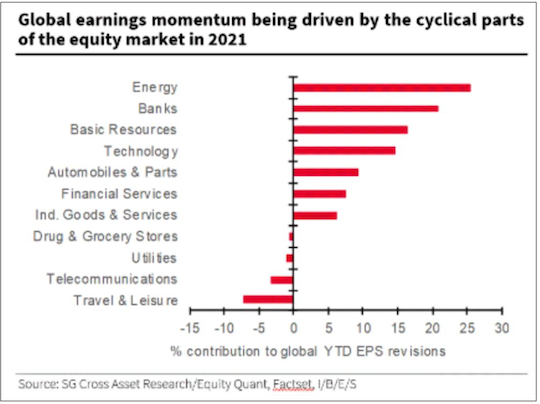 I’ll give credit to Kolanovic here.

He’s most bullish on banks as, “Fundamentals are improving and you have stimulus and supportive monetary policy, and now declining VIX, little by little, will help flows.”

It’s too early for me to jump on the bullish bank bandwagon, though. I recommend waiting for the Q1 earnings reports, due out in the coming weeks, for confirmation.

As I’ve detailed here countless times before, small caps have been kicking the crap out of large caps like every other team has historically beat on the Knicks.

However, in recent weeks, small caps have faltered, prompting some premature warnings.

Like from Michael Wilson, U.S. equity strategist at Morgan Stanley.

He takes the pullback as a “potential early warning signs that the actual reopening of the economy will be more difficult than many believe.” 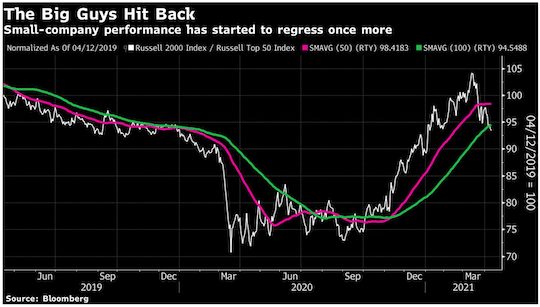 Small caps are simply taking a breather after rising a staggering 130% since the March 2020 low. That’s nearly double the return of large caps over the same period.

Historically, a few percentage points per year of outperformance is considered significant. So let’s keep things in perspective Mr. Wilson.

Small caps giving back a few points in recent weeks doesn’t mean the longer-term trend suddenly ended. It’ll take much more underperformance than that to declare this a turning point.

Newsflash: I don’t believe that’s on the horizon, as small caps are largely US-based and therefore, the biggest beneficiaries of the economic resurgence that everyone agrees is coming. 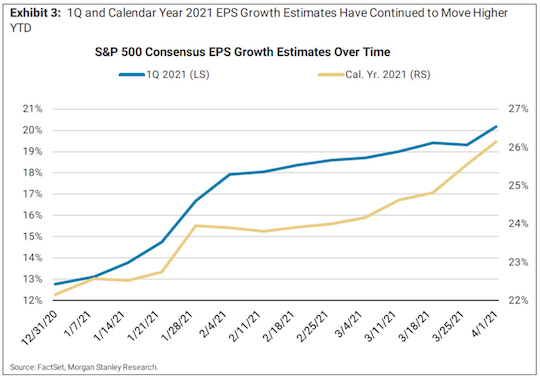 Consensus estimates for S&P 500 earnings keep rising. If large caps collectively are expected to increase earnings more than 25%, small caps should easily be able to double that rate.

And since share prices ultimately follow earnings, look for small caps to keep outperforming, making the latest dip a blip in the long-term trend, not some big reversal like other pundits want you to believe.

If you want to keep track of my thoughts on these market developments and more, follow me on Twitter here.

Stansberry Research editor, Dr. Steve Sjuggerud explains that to make big money through investing, you have to be willing to buy an asset when nobody cares about it, and sell it when everybody loves it.

How to Predict a Stock’s Performance

Penny stocks don’t have much in the way of fundamental information because, as I said before, they don’t have to publish financial documents. However, there are a few things to look for when trading penny stocks. Positive and negative indicators tell you what kind of risk you’re taking on by investing in a particular stock, even at a nominal amount.

Lord, What Fools These Traders Be

I recently saw a petition to remove the Pattern Day Trader rule. Let me break down for you why that is an AWFUL idea.

A Story About The Time I Took on Nasdaq

I’d think to myself, ‘Wouldn’t it be cool to be up there someday? To close the stock market?’

To be a well-rounded trader, you need to be familiar with all the different sectors in the stock market, the major players, and what influences them. I’ll go over all of that for you today so that you can trade smarter.

One of the worst things I see people doing when they start investing is get too hyped about one market sector that is doing well. They jump all in on technology, or gold, and don’t think about what will happen when that sector falls off. When it eventually does, they are left with a shattered portfolio and huge losses. Keep reading and I’ll share some ways you can protect yourself from the drop.

Why I Trade Penny Stocks and Why You Should Too

I’ve been asked in countless interviews about penny stocks. How they work, why I trade them, how I got started, and being America’s number one penny stock trader, it makes sense! People want to know how I took a modest amount of money and turned it into millions. It’s not a great secret, but many people just don’t understand all the benefits of the kind of trading I do. Read on and I’ll explain exactly why I trade penny stocks instead of using a traditional ‘buy and hold’ method.