$1.9 Trillion in Stimulus Is Kicking Off a Dollar Rally

Markets are all about expectations…

There’s a wave of new dollars flowing into the economy as we speak. Stimulus checks are hitting American bank accounts, and government spending will almost certainly reach a new high in 2021.

Despite all of that, the U.S. dollar has reversed its recent decline and is poised for a rally higher.

How is that possible? It’s simple… Markets are all about expectations.

The dollar had been in decline since COVID-19 took center stage last year. It fell double digits from March 2020 to year’s end.

That’s the worst decline we’ve seen in several years. And if more stimulus means more dollars, and more dollars means less value for every buck out there, then most folks would bet the decline was just getting started.

That seems to be dead wrong, though.

Instead, the dollar has turned around since the end of 2020. It’s not up by much, but the trend has reversed. Take a look… 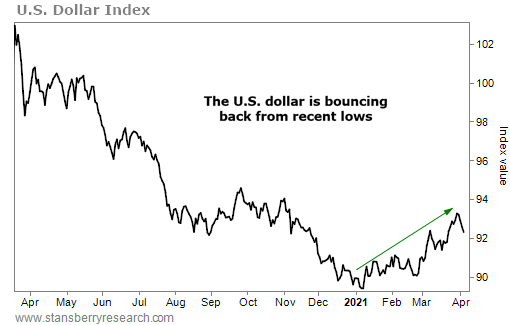 This reversal has been in place for months. And it makes sense…

Joe Biden won the presidential election in November. And it was immediately clear that more stimulus was his primary goal. By the start of 2021, the numbers came into focus. And then… it just became an expectation game.

Markets expected a couple trillion extra dollars floating around. Now that the money has shown up, it’s no big deal. It’s already baked in.

It’s more than that, though. Futures traders have been betting against the dollar at a record level. And that tells me the small move we’ve seen so far could be the start of a larger trend.

The chart below explains it. It shows the Commitment of Traders (“COT”) report for the dollar. By looking at this, we can see what the so-called “dumb money” speculative futures traders believe about the dollar.

When the level is incredibly low, like it is today, it means these folks expect the dollar to fall. But this is a contrarian tool. So when traders all agree, the opposite tends to occur.

That’s the situation for the dollar right now. Take a look… 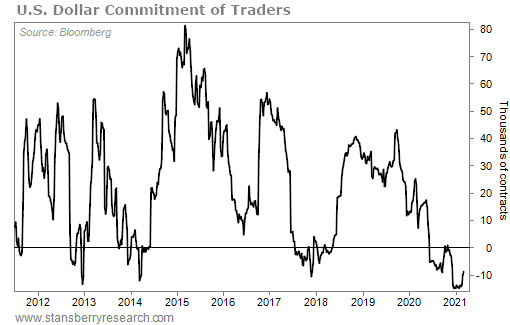 Now, we have extremely negative sentiment combined with a slight reversal in the dollar. History tells us this could be the beginning of a major move higher.

This shows the market’s expectation game in action. You’d expect major stimulus to hurt the dollar. But everyone knew it was coming… so much so that bearish bets hit record levels.

You might think this is simply a short-term move. But consider this…

You might think these rates are laughably low. But in Europe, banks are charging depositors that have large amounts of cash in their accounts. Negative rates have taken over.

If you have a global view and Europe charges you to hold cash, then earning 1.65% in the U.S. doesn’t sound so bad.

Simply put, the dollar is still the best currency in the world once you consider interest rates. And if that holds, it means this reversal in the dollar could last longer than you’d expect.

Why You’ll Never Look at Food the Same Way Again

Trend Trader Daily editor, Lou Basenese explains the concept of “forced adoption” and how it’s changing the way consumers everywhere are getting their groceries. Plus, how you can benefit from the shift.

The Secret to Succeeding as a Part Time Trader is…

Whether you’re trading part-time or full-time, you want to work smarter, not harder. Here are some of my best tips for how to make it work…

Why Journals Aren’t Just for Your Feelings

Let’s get your education underway in 2020 with a FANG.

How Much Should You Invest?

Yesterday I told you about another way to trade: short selling. Today, I’ve broken the “how to” for shorting stocks into seven steps. And at the end, I’ve thrown in some tips to help you get started.

This Is Like Sitting in on Private Board Meetings

Stansberry Research editor, Marc Chaikin shares how he developed an indicator to track the smart money.