I’m not one to mix politics with investing.

But it’s imperative you understand what the Supreme Court just did to protect tech innovation and progress. For decades to come.

This will certainly have an impact on your investing.

In case you missed it, the Supreme Court issued a ruling Monday in Google LLC v. Oracle America, Inc., No. 18-956, finding Alphabet Inc. (GOOG) did not violate any copyrights when it incorporated part of Oracle Corporation’s (ORCL) Java software code to create its Android mobile operating system.

As several media outlets described the ruling, this was the “biggest programming copyright Supreme Court case ever.”

I appeared on Fox Business’ Mornings with Maria yesterday to explain why. You can watch the replay here or by clicking on the image below. Then, read on for more details, which I didn’t get to share because of time constraints… 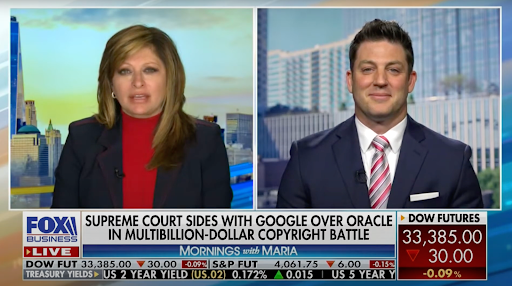 Four Tenets of Fair Use

As an adamant supporter of intellectual property rights, you might find it surprising that I’m coming out in defense of Google in this case.

But don’t be. There are clear definitions regarding copyright violations and fair use (see here).

The irony here is that back in the 1990s, Oracle argued against copyright protection for code. That was before it purchased Sun Microsystems and acquired the Java code in question.

Nothing like changing your stance to suit your economic interests, right?

Well, it doesn’t matter anymore, because the Supreme Court made the right decision in opposition to Oracle. And I say that confidently because of the following…

A key tenet of software development is, as Microsoft described in a filing with the court (emphasis mine), “sharing, modifying, and enhancing previously developed code to create new products and develop new functionality.”

That’s all that Google did.

The company used about 12,000 lines of Java code to ensure interoperability.

In total, the entire Android operating system involves about 15 million lines of code. So we’re talking about Google’s final product containing less than one tenth of one percent of another company’s work.

More specifically, it falls under the fair use factor involving how much of a copyrighted work is used in relation to the whole.

It also falls under the fair use factor involving the effect of “use upon the potential market for or value of the copyrighted work.”

I’m sorry. But Java and Oracle didn’t suffer anywhere near the $9 billion in damages they were seeking in the lawsuit.

A Landmark Case for Innovation…

At the end of the day, the Supreme Court’s decision puts to bed a lawsuit that’s been threatening the pace of innovation for software development for the better part of a decade.

Yes, that’s how long this court battle’s been going on.

But now we have clarity.

Instead of preventing developers from leveraging existing code to create entirely new and impactful solutions that literally change the world, they now have the freedom to keep creating.

And a Landmark Case for Investors

And as far as our investments are concerned, the lack of unnecessary litigation promises to bring more compelling products and companies to market.

If you have any doubt how valuable that can be as an investor, consider this:

Since releasing its Android operating system on September 23, 2008, Google’s stock is up 938%.

One could argue that the software wasn’t the main driver of Google’s business and therefore isn’t responsible for that massive appreciation. But I’d challenge that thinking. At least in part.

Remember, back in 2008, we were in the midst of the smartphone boom. Android software democratized innovation and ushered in an era of competitors to Apple Inc.’s (AAPL) smartphones.

And in case you didn’t know, Android is the dominant smartphone operating system in the world today, with over 70% of smartphones using it. 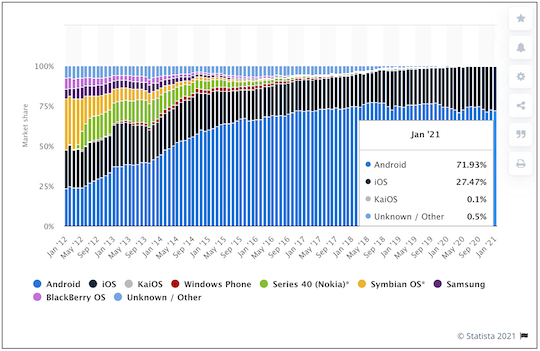 That’s certainly an accomplishment, and certainly worth a meaningful portion of Google’s stock appreciation, don’t you think?

Can You Afford to Think?

How You Can Profit in a Financial Crisis

When the financial crisis hit, I didn’t lose money like the majority of Americans. I actually made money. I’ve continued to use this strategy over and over again over the years, refining my methods as I go and teaching my students how to use them too.

Yesterday we left off talking about some tips for using RSI. Let’s finish up with those today…

Value investing is an art. Finding undervalued penny stocks is even more difficult. But that’s why you have an expert, me, helping you along the way. Today were going to pull some lessons from the ultimate value trader, Warren Buffet.

The Pandemic Is Spreading and Markets are Crashing

Stay safe out there. It’ll get worse before it gets better.

The Formula for Finding Your Sweet Spot

Key Tips to Get Out — And Quickly!

Now, I’ll share some tips — or even better, some universal rules of trading stocks — that you should always follow when entering a position.