Once a week, we abandon the long-winded analysis in favor of a few carefully selected graphics to sum up an investment trend and/or opportunity.

This week, I’m dishing on the biggest developing trend in pandemic-related investments. (Hint: It has nothing to do with vaccines.)

I’m also serving up a friendly reminder about why you should obsess like an economist over jobs.

Last but not least, I’m sharing a burgeoning opportunity that involves a robot apocalypse. (Kidding. Maybe).

Spring has sprung. And so has a leak in all the highflying stocks that benefited from the work-from-home trend.

Per The Wall Street Journal, “The sectors that benefited most from the pandemic-inspired shift to working from home have fallen hard since late January.”

Ouch is an understatement, as you can see in the chart below. 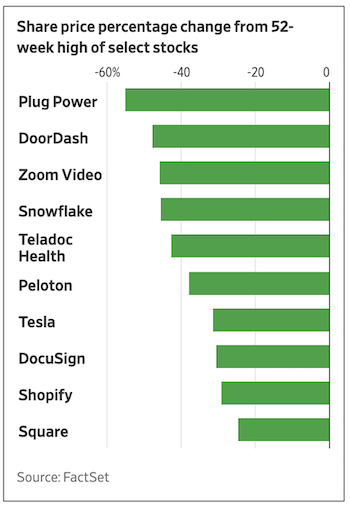 This isn’t an effort to add insult to injury for anyone who owns these stocks.

It’s a call to action.

A massive shift is underway in the markets as a national and global reopening becomes more imminent.

The investments that worked during the stay-at-home pandemic times won’t keep working. Investors who can adapt quickly will keep profiting. Those that can’t? Well, they’ll learn the hard way.

Rest assured, I’ll be working hard to make sure we’re in the former group, not the latter.

All eyes were on initial jobless claims this morning. While you might never think about paying attention to this economic metric, you should! 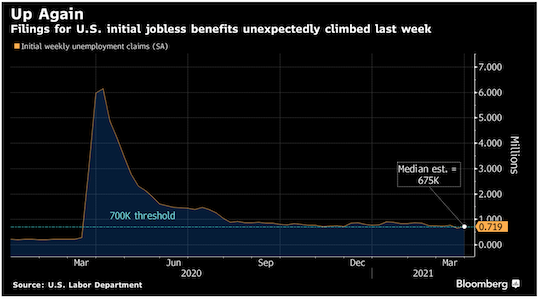 In fact, the relationship between initial jobless claims and the S&P 500 is undeniable.

As claims go down, stocks go up (and vice versa).

This strong inverse relationship is one of my favorite leading indicators.

So if you’re trying to figure out where stocks are headed next, look no further than weekly initial jobless claims.

The key trend now is maintaining the status quo, which even this week’s slight unexpected uptick did. As you can see, we’re operating at a pretty steady state.

But that’s about to change!

With trillions more dollars of stimulus headed for the markets, look for this metric to steadily decrease, which should lead to steadily increasing stock prices, based on history.

Speaking of betting, a new trend is becoming obvious that should lead to profits for switched-on investors in an unexpected area of the market…

I’ve been banging the table on chip stocks for a year now. I was right!

But I’m not here to brag. Instead, I bring up the call to underscore a new opportunity that’s emerging from the semiconductor shortage and surge.

A growing trend to bring supply chains back home is going to lead to more chip manufacturing capacity in the United States.

And new builds always include new technology. Chief among them in this upgrade cycle will be automation equipment.

Or as UBS analyst Adam Scheiner sums it up (emphasis mine):

“The [chip] crisis has also highlighted how companies cannot afford to have all their supply coming from one country that could shut down their entire manufacturing footprint. Localizing efforts could cause a boost in new factory construction, which could benefit companies exposed to automation and robotics technologies.”

As it turns out, the US severely lags behind the rest of the world in terms of automation. Take a look: 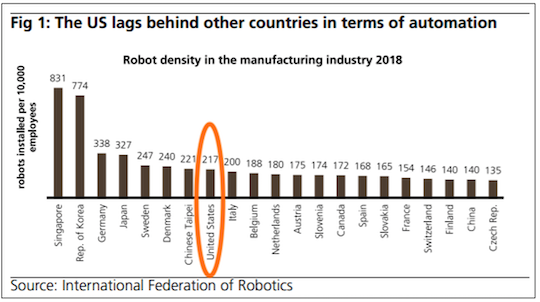 That means the time is ripe to start identifying under-the-radar robotics and automation investments.

Money & Markets strategist Adam O’Dell shares a better buy for retail ETF’s. “You can use my Green Zone Stock Rating System to ‘x-ray’ an ETF and its individual stock holdings.”

How to Handle a Roller Coaster Market

Markets are always going up and down. If the stock market trends up over time, it’s called a bull market. If it trends down, it’s called a bear market. But for a day trader, you need to understand market fluctuation at a much deeper level.

Don’t Make Another Trade Until You’ve Read This…

How can you become a good day trader? Let’s put it all together into a nice, workable plan. Keep in mind, before you make a single trade you have some studying to do. But this will help you along the way.

Advantages of Being a Millennial Trader

The second installment of my 26 key financial terms every millennial trader needs to know.

Newbie Trader? There’s an App for That.

If you want to succeed as a trader, you need to make use of the resources that are available for you. That means getting the best brokerage, and brokerage app, that you can.

The New Age of Stock Trading is Here! Are You Prepared?

Gone are the days when you had to pick up the paper in the morning to research a stock, and call your broker to place a trade. Now most trading is done online, or even on your phone. There are a lot of options for different apps you can use to do your trading but which one is best? Are they secure? I’ll tell you the best apps out there to protect your information, and get you trading in the modern era.

Let’s get your education underway in 2020 with a FANG.