How To Profit From Zoom’s “Timeout”

It’s no secret I’m 100% convinced that Zoom Video Communications, Inc. (ZM), the poster child for working from home, is destined to crash and burn as the world re-opens and returns to some semblance of normal.

It’s all about the data, of course, and it keeps piling up to confirm my bearish thesis.

But don’t worry. Today I’m not using the latest data point to tell you to sell short the company again.

To the contrary, I’m pounding the table to buy an obvious beneficiary as work-from-home exhaustion reaches untenable levels.

Well, fast-forward a few days — and in response to employee complaints, one of the world’s largest banks, Citigroup, officially kicked-off the demand decline by instituting “Zoom-Free Fridays.”

As Bloomberg reports, “Chief Executive Officer Jane Fraser has barred internal video calls on Fridays and encouraged vacations in an effort to combat workplace malaise brought on by the coronavirus pandemic.”

I can hear the hallelujah chorus emanating from the homes of Citi’s 204,000 employees right now.

And I’m equally giddy about the investment implications. Here’s why…

Free to Roam the Country

One could argue that Citi’s new mandate will force employees to pack Monday through Thursday with more Zoom calls.

But not so fast.

For one thing, there’s only so much time in a day. Presumably, Mondays through Thursdays are already packed.

Not to mention, part of Citi’s “Zoom-Free” initiative included instructing employees to “avoid scheduling meetings outside of what were normal working hours.”

Most relevant of all? Citi is starting to talk about what work will look like after the pandemic.

No surprise, it involves returning to the office. Albeit in a modified form, with a minimum of three days in the office, and up to two at home.

But the point is crystal clear — whereas Zoom was mandatory to conduct business during the pandemic, it’s going to become optional in the not-too-distant future.

And once it’s optional, it won’t be an option at all for so many fatigued workers.

I expect Citi’s “Zoom-Free-Fridays” to quickly be copied by other large employers.

And that’s when the bottom promises to really fall out for demand, and in turn, Zoom’s stock price.

But this critical turning point also promises to usher in boom times for air travel.

Think about it. The other side effect of working from home for a year and hating all the Zoom calls is equally hating the fact we’re not able to leave the house to travel.

Bottom line: In the history of air travel, there’s probably never been more pent-up demand as right now. And once again, the data reveals it’s starting to be released…

As I’ve explained to you before, the most reliable leading indicator for when to bet big on an airline rebound is simple: the number of travelers cleared through TSA checkpoints.

And guess what? U.S. airport traffic just hit the highest level since March 2020.

Let me put that figure into more perspective for you…

During the darkest moments of the pandemic, airport traffic plummeted a staggering 96%.In recent months, I shared how it rebounded to be down “only” about 60%.

Well, the latest traffic figures represent another major improvement. We’re now down “only” about 40% from pre-pandemic levels.

If I update the chart of the total number of daily passengers that I’ve shared before, you’ll notice that we just witnessed a key crossover point.

Demand is surging versus a year ago, when it was plummeting. 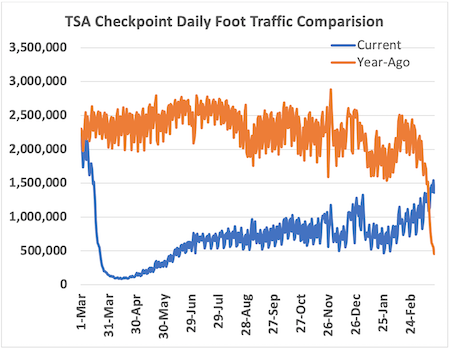 Look for this trend to continue gaining momentum.

I say that based on the data, as well as on my own personal travel experiences in recent weeks. Airports and planes are packed.

Yes, part of that is related to airlines reducing capacity to survive the pandemic. But not all. And they’ll be quick to bring routes and planes online as this trend continues to play out.

Remember, the market is a forward-looking beast. So if we wait for a full rebound here to invest, it’ll be too late.

As I’ve shared before, the most conservative way to play this trend is to invest in the U.S. Global Jets ETF (JETS). Truth be told, it’s the only true pure-play travel ETF on the market.

As a refresher, JETS provides immediate exposure to a portfolio of 40 airline and airline-related stocks, thereby reducing our risk.

It charges a reasonable expense ratio of only 0.60%.

And lastly, it’s already in an uptrend, nearly doubling since I originally put it on your radar.

But there’s plenty of upside remaining. Don’t miss out (again)!

Step one of being a successful trade is NOT blowing up… Here are 8 ways to make sure your account never goes “poof”... Read them closely, then promise me you’ll be a safe trader...

Pre-Market v.s. Regular Hours: What You Need to Know

I’ll just put it out there: Pre-market trading can get a lot more complicated than just waiting for regular market hours.

Answers from a Wise Man

People ask me the same questions all the time. If I had a dollar for every time someone asked me a question I’ve answered a thousand times in writing, I could stop trading. But I want to make sure you have the answers, because this is important. So here we go!

A Lesson on Goals: How to be Rich AND Happy

This issue will review some recent trades as well as an important lesson on goals.

That Time I Took on Nasdaq

I’d think to myself, ‘Wouldn’t it be cool to be up there someday? To close the stock market?

I Personally Confronted the Fed

Paradigm Press editor, and ex-Wall Street Insider Dr. Nomi Prins shares the story of the shocking invitation she received from the Federal Reserve Bank to speak at their annual conference with the IMF and the World Bank. “I was in shock. But I was assured they knew exactly who I was and that the invitation wasn’t a mistake. I couldn’t say no. I had a chance to personally confront the Fed and give them a piece of my mind.”