As The Wall Street Journal reports, this “flashiest trend in finance” traces its roots to 1993 — to a pair of law-school pals that created a new way for private firms to access the capital markets and everyday investors.

Rare and obscure for decades, SPACs are now all the rage. So much so that we can no longer avoid the trend.

Today I want to share two dirty little secrets about SPACs that should help you get up to speed about this trend in no time — and start profiting from it.

Back To SPAC Basics

First things first, let’s make sure everyone is on the same page…

SPACs, which are also known as blank-check companies, start their life as “shell” firms — at first, they have no active business operations. Then they raise money to list on a major stock exchange. Their sole purpose is to combine with a high-potential private company.

In other words, SPACs are a form of IPO (initial public offering). But with a SPAC, the investors that put up the initial capital have no clue what they’re buying.

Or in Seinfeld terms, SPACs are IPOs about nothing!

Naturally, such “blind” purchasing leads many to associate SPACs with extreme risk.

History doesn’t help here. That’s because the predecessor to the SPAC structure was something called “blind pools.” During the boom times of the 1980s, blind pools were exploited to raise money for a litany of penny-stock frauds.

But SPACs shouldn’t be painted with the same broad risk strokes as blind pools.

You see, the lawyers behind the first SPAC understood the historical context. So from the start, they incorporated investor protections to prevent fraud. For example: SPAC investors have to approve proposed mergers; they can get their capital back; there are disclosure requirements; and so on.

And over the years, the trend has been to increase these investor protections. This has made SPACs much safer than most investors believe.

Up, Up and Away

As you can see in the first chart below, the number of SPACs ballooned 320% last year, to 248 deals.

And less than three months into 2021, we’re already closing in on the 2020 high-water mark. 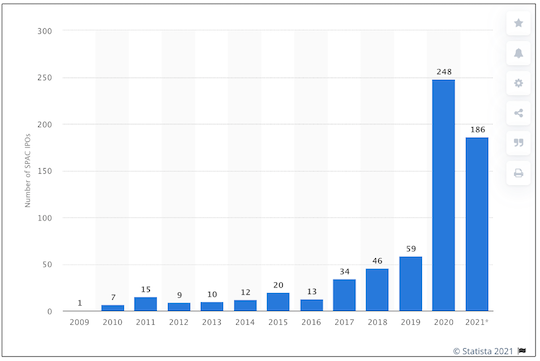 In dollar terms, SPACs have already raised $38.3 billion this year. That’s equivalent to about 65% of all capital raised by IPOs, and up from about only 20% two years ago, according to Dealogic.

Typically, a rapidly accelerating trend like this leads to runaway prices and puts investments out of reach for rational investors like you and me.

When SPACs Dip, We Should Dip

As you know, the market’s been experiencing a wee bit of a pullback. And while no one likes to watch their portfolio values plummet — even in the short term — the beauty of a downturn is it can reset prices in frothy areas of the market.

As you can see by following the red and orange lines in the chart below, the prices and market caps of SPACs cratered lower during the recent sell-off. 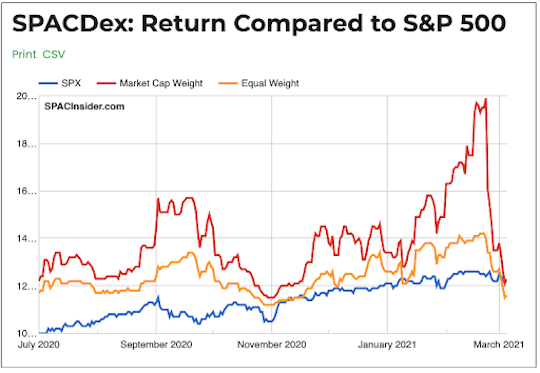 I know this firsthand, as I’ve seen some of my SPAC investments go from being up a respectable 20% to 30% before announcing a merger, to now sitting 40% below my entry price.

I’m not freaking out, though. Hardly. And here’s why…

The biggest SPAC profits come after an announcement is made. In two waves.

So I’m still way ahead on my SPAC investments… with more profit potential locked-and-loaded.

Thanks to the recent pullback, I’m convinced the SPAC market is setting up for another profitable run for tuned-in investors.

That’s why, in an upcoming issue, I plan to share my strategy and precise details (for free) on how you can start profiting from this boom.

Former hedge fund manager and editor for Automatic Fortunes, Ian King shares how new technology has not only transformed Wall Street’s trading floors, but is changing businesses all across America. The changes will have massive implications these developments will have on the way we live, shop and commute. Plus, find out about the #1 stock set to profit because of it all.

Without One of THESE, You Will Fail

Trading is as much a mental game as it is a technical game. If you don’t believe that you are going to succeed as a trader, chances are you won’t. You need to get into the right mindset as a trader or you’ll never make it.

The BEST Way to Trade in a Trade War

All the trade war press brings up a lot of questions from both newbies and experienced traders alike. So, I thought I’d address it.

Editor of Technology Profits Confidential, Ray Blanco shares his method for successfully investing in the new space race. “It’s still far off its all-time highs after the market’s tumble in 2020 and has a lot of room to grow.”

How My Wife’s 401(K) Ended My Retirement

Stansberry Research editor, Marc Chaikin shares what pulled him out of retirement and how he wants to help individual investors.

Trend Trader Daily editor and founder, Lou Basenese, is back with his prediction on 2021’s top performer: biotech. “It’s now become vital to survival. Literally. And that’s not going to change anytime soon.” Read on to find out why, and how you can get in on the Biotech Boom 2.0.