[Charts] The Next Massive Mania-Trend

Once a week or so I like to embrace the adage that “a picture is worth a thousand words.”

I select a handful of charts that put recent investment news into perspective for you. Then I throw in some snarky commentary.

All it takes is a quick glance and you’ll be up to speed — and more importantly, poised to profit.

All eyes are fixated on 10-year treasury yields as they keep rising.

They’ve spiked so much — a whopping 0.2% to 1.6%, momentarily — that all the Chicken Littles in the market want us to believe that runaway inflation is right around the corner.

Meanwhile, the dividend yield on the S&P 500 Index has been falling.

And (gasp) the two lines crossed in the last week! It’s a dreaded bull market death-cross, they say.

But the survey data says? Nonsense! 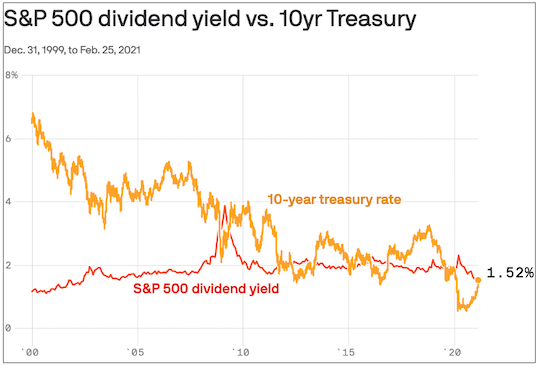 What’s more, as Bespoke Investment Group notes, “These crosses [since the financial crisis] have actually been far from bearish for the S&P 500’s near-term performance.”

More specifically, in the 30 days following the cross, the S&P rallies an average of 1.5%. And it keeps rallying for an average gain of 7% over the next three months.

Translation: Focus on the data, not the fear mongering in the headlines. The dreaded treasury/dividend yield death-cross is bupkus!

The recent market sell-off is healthy. It’s a prime opportunity to add to positions you love at cheaper prices.

Recently, I alerted you to a booming niche in the IPO market for Special Purpose Acquisition Companies (SPACs).

The latest estimates now call for a staggering 1,000 SPACs to hit the market this year.

That would be more than four times the number of SPACs last year. 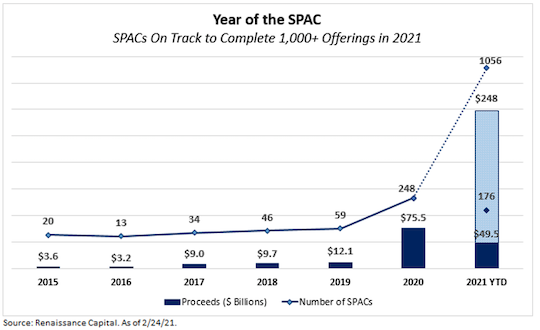 With so many opportunities, I’m fine-tuning a system to profit from this boom.

You can click here to see what I’m talking about… and what I’m recommending you do to grow your wealth this year.

Google Trends data reveals that everyone and their mother wants to know more about SPACs. 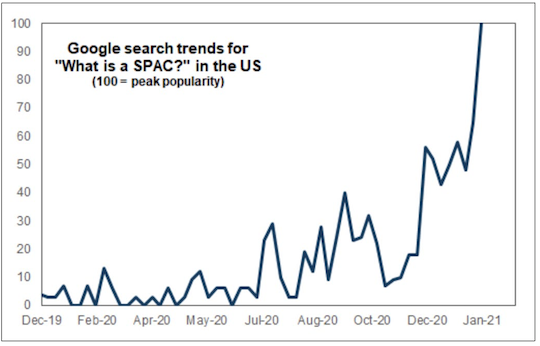 Forget meme stocks — this data makes the case for SPACs becoming the next massive mania-trend to invest in.

Old Wall Street Is Reeling: What to Do in the GME Aftermath

Editor of Green Zone Fortunes, Charles Sizemore shares how Wall Street doesn’t have the information advantage it used to. “The idea that Wall Street can manage things as they used to is ridiculous at this point. So, what should we do about it?”

How You Can Make Great Money During Falling Markets

Stocks on the stock market move in two directions: up and down. When a stock’s price increases, sellers make money by selling at the higher price. That’s called buying and selling stock. However, there’s another way to trade…

A Dangerous Trading Technique I NEVER Use

I get questions from traders all the time about trading on margin, I don’t trade on margin and I don’t recommend it. Here’s why…

I’ve been getting a lot of questions like “What sort of trade is the best when the markets are this volatile?” My answer may shock you…

Weekly Fortune Alliance editor, Greg Guenthner shares how to avoid common trading pitfalls in our current market. “Let’s ignore the mania for a minute and try to root out some of the bad habits that have the potential to derail your profits in any market environment.”

Pre-market trading is not for the faint of heart. It’s often volatile, and little understood. However, as this post will show, if you take the time and effort to learn how to understand pre-market trading, it can provide opportunities for you as a trader.

The Trading Sector That Will Give You the Munchies

There’s always a hot sector. Before the crypto boom in 2017 & 2018, we saw the action in shipping stocks, and then it was A.I. stocks that went wild — but what’s the hottest sector of 2019? I’ll give you a hint: It’ll give you the munchies.