The Secret to Trading ANY Stock

I talk about penny stock patterns a lot. No big secret that the supernova is one of my favorites.

And as the weather is getting colder, the market is heating up.

Last month, many of my followers capitalized on Karuna Therapeutics, Inc. (NASDAQ: KRTX) — one of the largest supernovas of the year.

Now, after looking at the KRTX chart, you may be thinking … “But KRTX isn’t a penny stock — how can it be a supernova?”

I’ve got news for you, the patterns I teach can apply to any stock in any market.

The key? You have to completely understand the patterns. I’m not talking about briefly reading one or two of my articles. I mean, you gotta FULLY digest the pattern.

Once you understand the pattern, you don’t have to stick to just low-priced stocks. You don’t even have to stick to U.S. stocks. I’ve heard these patterns can work in China, the UK, Germany, and Australia.

Hell, I even have followers who use my patterns on crypto stocks.

Again, the key is to understand it. And once you do, open your mind to all the places you can use it in the finance industry.

It’s not something that I do, but one of my long time followers and mentor to new traders, Mark Croock, trades large-cap stocks with penny stock patterns all the time. He still trades penny stocks, but he’s up over $260,000 this year, largely from playing Beyond Meat, Inc. (NASDAQ: BYND) like a penny stock.

Similar to the supernova that occurred with on KRTX, BYND had a huge short squeeze at the beginning of 2019. 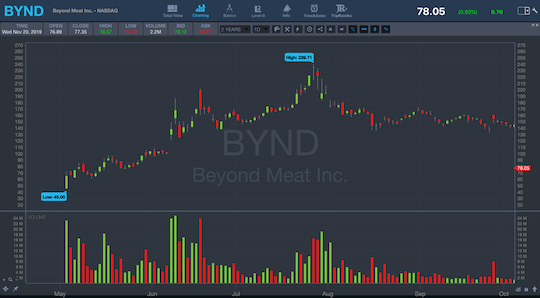 From his decade of studying, Croock was prepared to move on the BYND supernova.

It may seem scary to transition from penny stocks to large-cap companies, but the patterns can be nearly identical. If you’re willing to study enough, you can master any pattern in the market.

Croock didn’t just wake up one day and decide to apply the supernova pattern to large caps. He studied for years. That’s the kind of dedication you need to become a profitable trader.

If Croock’s $260,000 trading year isn’t proof enough that this method of trading works, take a look at the KRTX supernova.

On the morning of Monday, November 18, KRTX published a press release about one of their Phase 2 drugs. The drug, designed to treat acute psychosis in patients with schizophrenia, met the primary endpoint. For biotech companies, the phase results can be a huge catalyst that makes or breaks a company.

The press release was exactly the catalyst KRTX needed to start its colossal supernova run.

The previous Friday, KRTX closed at $17.80 and began to gap up once the press release hit the wires. KRTX opened at $32.50 and immediately began to have a morning spike. Despite being a higher-priced stock, KRTX had a low float, allowing it to reach a high around $100 on the first day of the move. 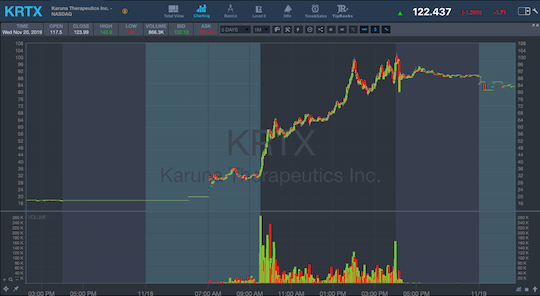 I can’t tell you how many people I saw in chat rooms saying, “I’ve never seen anything like this, it has to crash.”

A lot of over-aggressive short-sellers kept trying to predict the top. When KRTX started to consolidate around $65, they started saying, “This is definitely over!”

But KRTX was up from roughly the $30s to the $60s. Rather than waiting for the backside, they all started to short midday…

… and they all got crushed into the afternoon.

Then … even at $100… the shorts were excited thinking $100 was the top. But it curled back around and tested highs again into the close.

Let this be a lesson: Don’t short and think you can guess the exact top. Never underestimate the power of a supernova on its first green day.

Shortly following the close on November 18, KRTX execs filed a financing for 2,600,000 shares. The company needed money to fund the third phase of its study and work toward full FDA approval.

So, they tapped into the public market. Financings are standard for companies after an extensive run. Financing firms often give them more money due to their higher share price.

And these financings aren’t necessarily terrible for a stock price. Companies simply need more money for research and development, and financings are the easiest way for a company to acquire a large amount of money.

But sometimes shady penny stocks get trapped in toxic financing deals, which is devastating to shareholders.

Typically, the offerings attract short-sellers because an offering is a negative catalyst. So, the remaining over-aggressive short-sellers who didn’t blow up their accounts on the first day of the move started to short KRTX after the offering.

The same thing happens with every supernova … too many short sellers are too early. 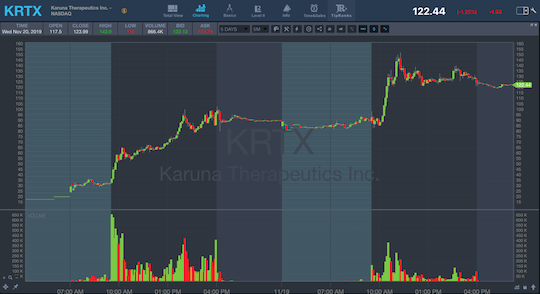 What’s Next for KRTX?

Where do I think KRTX will go next?

Honestly, I’m not sure. It has pulled back since the 18th, but how far it will fall, I don’t know. If there is another bit of positive news about KRTX, It could go higher still.

The lesson here, and I can’t say it enough: You never know how high a short-squeeze supernova can go. 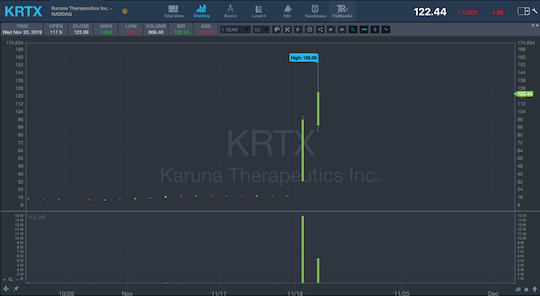 That’s nearly 10X move in only two days! It’s unlikely someone held the entire time, but many of my followers took the meat of the move and locked in their singles along the way.

Even though, I never personally traded KRTX because I prefer to stick to lower-priced, OTC stocks, many of my followers did. They took the patterns I teach and applied them to KRTX.

These followers studied hard and prepared for this play. Supernovas like KRTX don’t happen every day, but you should always prepare for them.

Penny stock patterns don’t have to just be for penny stocks. KRTX is a stellar example of the supernova in a high-priced stock.

With shares of Novavax, Inc. (NVAX) doubling during the last few weeks of January — and surging more than 3,000% over the last year — investors are on the lookout for the next Covid-19 vaccine stock set to soar. But it’s no easy task. There are currently 4,636 Covid-19 treatments and trials underway. Sorting through all those trials quickly enough to identify any actionable opportunities might seem like mission impossible. But, Trend Trader Daily editor and founder, Lou Basenese, is going to help you do exactly that.

Most new traders have never experienced a bear market. I’ll go over some strategies for how to navigate a bear market and still make money.

Navigating the complex world of investing is tough in the best circumstances. When you mix the media in with it, it becomes doubly complex. You have to sort through people’s opinions as well as the facts. I’ll tell you some of what I do to judge both the quality and veracity of a press release.

SNAP Back into AR

Trend Trader Daily editor, Lou Basenese identifies one company that has jumped all in on the AR trend and explains why you should avoid that company.

Spotting a Dead Cat Bounce… Yes You Read That Right

How to recognize and capitalize on the dead cat bounce phenomenon.

The Growth Stock Rebound Is Just Getting Started

I Used This Strategy to Make Millions… You Could Too

Day trading and penny stock trading go hand in hand. So if you want to make money like I’ve done, you need to know how to set yourself up for success when day trading.