The Golden Ratio of Stock Trading

Yesterday, I started telling you about Fibonacci retracement, I walked you through the math, and how they work. Today, I’ll show you how to apply this exciting technical analysis tool to your own trading.

So, without further delay, how should you use Fibonacci retracement in stocks you plan to trade?

Whatever you do, don’t force it!

If you’re ready to trade a stock on your watchlist, make a day trading plan.

Whatever you do, before you start making decisions based on Fibonacci retracements, it’s a good idea to see if the chart supports the theory. If you see clear support and/or resistance at the Fibonacci levels, it might be a good idea to use them as part of your plan.

What happens if the stock does not behave? Be prepared. That’s what I always say. Preparation is key. This is not an exact science! So be prepared to cut losses fast or close part of your position to lock in profits.

Don’t get stuck in a trade gone wrong because the friggin’ Fibonacci retracement tool tells you there should be support or resistance at some level. Remember, the indicator gives you an estimated range. If it was exact and reliable every trade would be a winner, right? 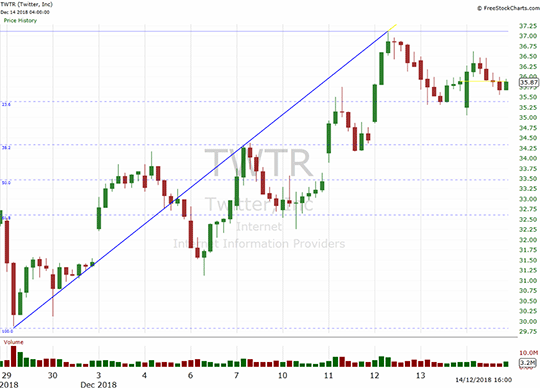 One more thing: I’ve included the candle shadows (the wicks) as the top and bottom of the trend line. Some traders say it’s more accurate if you use the candle body instead of the shadows. I’m sure I could find charts to support both sides of the argument. Again, it’s not an exact science.

If you’re going to use these advanced technical indicators, use more than one to confirm your trade thesis as part of your plan. Technical analysis is a complex subject with a lot to learn. Don’t get overwhelmed; keep studying.

As for me — I like to keep things simple. When you learn how to read a chart, start by identifying basic support and resistance. You can see those levels on most charts without plotting the Fibonacci grid.

How Reliable Is the Fibonacci Retracement in Predicting Stock Behavior?

One of the ways die-hard Fibonacci traders use the ratios is to create Fibonacci projections. To do this, you use the previous price swing and project the Fibonacci levels onto the next swing.

Is Fibonacci projection reliable? If the stock has a  history of reacting to Fibonacci retracement levels, then projecting into the future could be fairly reliable. Be careful, however, as things can get very skewed depending on where you start and end the trend line.

By the way, if you want to dig deep into Fibonacci stuff, there are several books available on the subject. I still recommend you keep things simple.

Example of How Fibonacci Retracement Can Be Used

If you’re determined to give this indicator a go, start with paper trading.

How should you use it? First, be aware there are traders who believe in Fibonacci retracement levels and use them as entry and exit points.

By understanding this, you can use the levels to confirm or deny your trade thesis. But remember, it’s subjective and there is human psychology at play. The price action may or may not follow Fibonacci levels.

Key Tips to Follow While Using the Fibonacci Retracement Tool

I tend to be a conservative trader. Plus I’ve lost some pretty hefty sums on trades over the years. Learn from my mistakes!

The worst thing you can do to try to chase a trade. So if the trade is going against you but the Fibonacci retracement tells you it shouldn’t — get the hell out!

Always follow this credo. If things go against you, get out. Close your position. Cut your losses.

Then you can take a step back and figure out what went wrong. Learn the lesson from the trade. If you start chasing losses and trying to make up for the loss you’ll lose more. So don’t do it!

Pay attention here. What I’m about to tell you might sound slightly controversial. But if you’ve been following me for a while, you know I hate the B.S. peddled by some of the so-called gurus out there.

I say this over and over again. The reason I mention it here is because sometimes stock promoters use technical analysis terminology to pump stocks. “Based on Fibonacci retracement, this super stock will break out to new highs and you could turn every $1,000 you invest into $14,276!” Yeah, right. That’s a huge load of B.S.

Like I keep saying, learn to play the pump and dump — but don’t believe the hype.

I’m not knocking Fibonacci retracements. Combined with other indicators they might be useful to you. But don’t let some slimy pump and dump promoter pull one over on you just because they sound like they know what they’re doing.

There are traders out there who swear by this indicator. They specialize in trading stocks or forex based primarily on the Fibonacci retracement levels.

Should you use them in your trading? One of the basic ideas I teach is that we’re all different. You need to decide if using this indicator works as part of your strategy.

I recommend you keep a watchlist. Then you can paper trade using Fibonacci retracement levels to see if it suits you.

In the Stock Market, Size Matters

I focus on trading low-priced stocks because of their high volatility. But I realize that style of trading isn’t for everyone. Many traders prefer to take longer positions with more stable large-cap stocks, especially if you don’t want to trade for a living.

Use This to Your Advantage in Your Investment Strategy

We already began looking at the different components of a stock quote: Ticker symbol… dividend yield… dividend per share… etc. I have a few more to cover with you today before talking about how you can use them as part of your investment strategy.

Why RSI Matters to You

Technical indicators are some of the handiest tools in a trader’s repertoire. But why exactly, and which ones should you use?

If You Don’t Have One of THESE, You Will Fail

Trading is as much a mental game as it is a technical game. If you don’t believe that you are going to succeed as a trader, chances are you won’t. You need to get into the right mindset as a trader or you’ll never make it.

My 9 Mistakes You Do NOT Want to Repeat

Find out about my nine biggest mistakes and how you can both avoid and learn from them.

Don’t Be Left Behind. Do THIS Instead…

The stock market is an ever changing environment, if you aren’t careful you will be left behind. You need to learn to change your trading strategy so that you can always be ahead of the curve.

Every Investor Should Know About This…

Fundamentals about investing that every trader should know by heart.