What if I told you I had a trading tool that gives you all the following information:

You might say to yourself, “Tim, that sounds like an awesome tool. What is it? How do I use it?” Well, that’s what candlestick charts tell you. You just have to learn how to read the message and then put it to use in your trading!

When you study candlestick patterns, remember that context makes a difference.

Sometimes an individual candlestick looks the same in two different patterns. This is true of numbers 5 and 7 below. They have different names based on the context — the overall trend. You might see the particular candlestick that gives these two their names and be confused at first.

Take a step back and figure out what preceded them.

In the following section, I’ll give you the 7 candlestick patterns — explained — with examples to clarify.

I’ll show you what each candlestick looks like in the context of a chart so you can see what I mean.

The supernova is one of my favorite chart patterns to play.

“I will trade volatile stocks.”

Supernovas occur when stocks experience high volume and high volatility. It’s an explosion in price that can provide many buying opportunities on the way up. Then there’s a huge drop in price which provides opportunities for short selling on the way down.

You only need to get in on a small piece of the move to be able to bank. If you take a small chunk of the move over and over again it can add up fast because these stocks are so volatile.

The supernova can be triggered by almost anything. News, world events, company hype, message boards — I’ve seen it all. Be careful. Sometimes supernovas last longer or are bigger than you think they’ll be going in.

Example of The Supernova 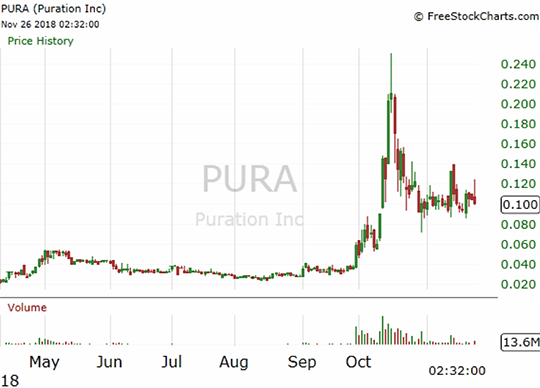 A stair-stepper is almost like a slower version of a supernova. It rises progressively with brief periods of pullback and consolidation. The consolidation period sometimes trades in what many traders call sideways price action. It’s another of my favorite candlestick formations.

Be aware that the stair stepper can turn on you suddenly. If there’s not a proper catalyst and the price keeps rising, eventually it will come falling back down.

Notice on the TNDM example below —  the first few ‘steps’ in March, April, and May (left side of chart) are small steps followed by long periods of sideways price action. Jump forward to June, July, August, and September and you see big steps with pullbacks.

Example of The Stair Stepper 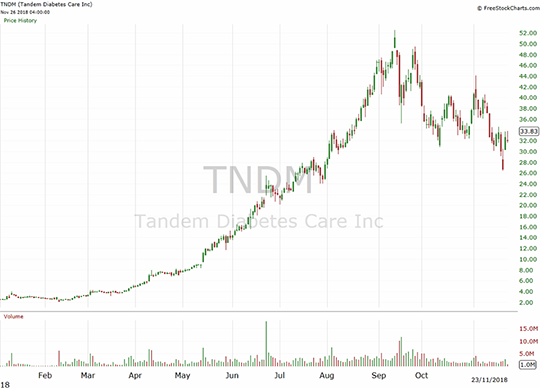 Let’s see if I can sum up the snore in a few words: random-ass charts with no predictability.

The snore is a boring pattern — I don’t recommend trying to trade it.

This is one I include so you can avoid trading it. Learn to recognize it and stay away. The obvious sign is a lack of price movement even with news you’d normally expect to be a catalyst.

The best thing to do with snores is wait until you see something to verify they are in play. Remember, stocks can change patterns. You might have a stock that’s a supernova one year and a snore the next.

Take a look at the ENZN chart below. It shows a period of several months when this stock did nothing but make me want to snore. It’s difficult to see anything in terms of plays or momentum. This is an extreme example of the snore. Best stay away from these.

Example of The Snore 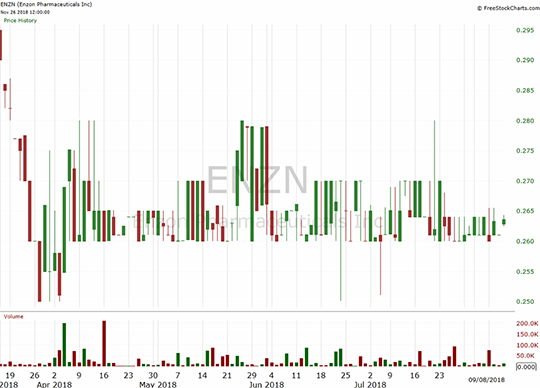 Have you ever watched a crow pecking away at food? One bite at a time — but never stopping until it’s gone.

I named this pattern the crow because that’s what I visualize when I see it. A crow, picking away at your money, one chunk at a time. Never stopping until there’s nothing left. This pattern looks like a long, slow fall. The stock sinks lower and lower in price.

The crow is caused by continuous selling pressure. Sometimes there’s a pushback — spurts of price strength — making it look like a reverse stair-stepper.

Take a look at the AGTK chart below. I included this chart because you can see it was in play back in December of 2017. At that time it went supernova. It stayed in play well into January and then started the long, slow decline characteristic of a crow.

Example of The Crow 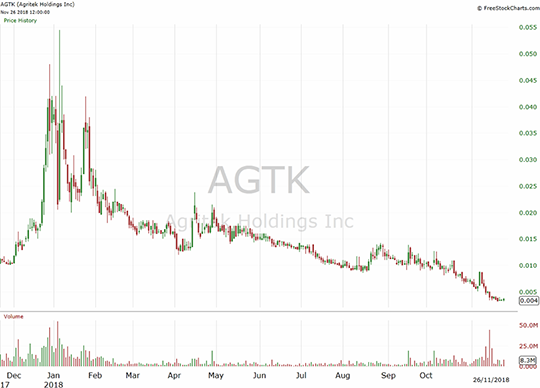 The shooting star is bearish and found at the top of an uptrend. It has a short body, a long upper shadow, and little or no lower shadow. Look for three or more consecutive rising candles, each with higher highs. Then look for a falling candle with an upper shadow at least twice as long as the body.

During the time frame, the price rose high above the open, only to fall below it on the close. Price action drove the price up but it met selling pressure. A shooting star can signify a bearish reversal. It has to be at the top of an upward trend to be considered a shooting star.

Check out the NBEV chart below. This is an interesting one because it shows you just how this is not an exact science. Technically this one would be considered an unconfirmed shooting star. Maybe even a failed shooting star.

Look at the circled candle. It follows at least three uptrending candles with new highs each time. It has a long upper shadow from testing higher prices and it closed down. So why unconfirmed? Because the next candle didn’t close lower than the shooting star.

This is an example of a brief pullback where the candlestick looked like a shooting star but was unconfirmed. Instead, the bulls won the battle. A good reason to step back and wait for confirmation before making a play. 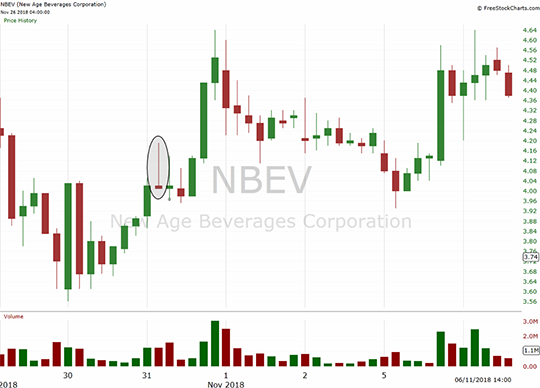 A Doji candle occurs when the open and close are equal (or at least very close together).

Doji means “same time” in Japanese. There are several different types of doji such as the long-legged doji, the gravestone, and the dragonfly. For today, we’ll focus on the hammer doji, which is a type of dragonfly.

In a dragonfly, the open and close are virtually the same but there is a lower shadow. A hammer doji is a dragonfly at the bottom of a downtrend. It is a bullish reversal pattern and signals the price could start to rise.

A traditional hammer candle looks like a hammer (right?) but the hammer doji looks like the nail ready to be driven down. By itself, it’s not a bullish signal. But it lets you know there is a balance between the forces of buy and sell.

Here’s an interesting chart — it’s a one day chart for KGKG in 5-minute candlesticks. First, you can see there was a big price jump when the market opened. If you are wondering why the previous day closed at 1 p.m. — that was Black Friday. It’s only a half day of trading.

Anyway, there’s a big percent gain first thing in the morning. Then there was some consolidation which looks a lot like a bull pennant. The circled candlesticks are two hammer dojis in a row after several bearish candles. They signaled a brief upswing into more consolidation.

There’s a lot going on in this chart —  from a bull flag to hammer dojis and our next candlestick pattern, the inverted hammer.

Keep in mind with all these patterns, you might not see them in every time frame. For day trading, you’ll be looking at what’s going on right now most of the time. But you can also confirm patterns by looking at a chart with a longer time frame. 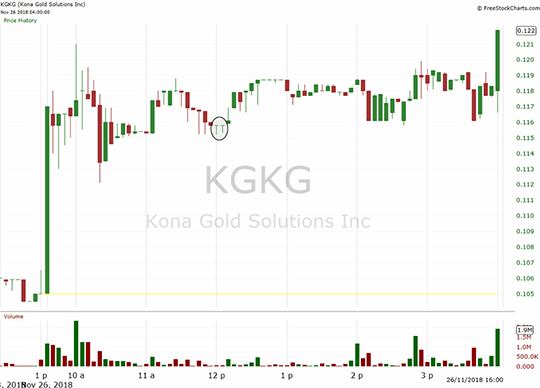 The inverted hammer looks like an upside-down hammer. The shadow extends above the short body.

It’s interesting to note that this candle looks an awful lot like a shooting star. However, it is bullish rather than bearish (close is higher than open).

The inverted hammer is found after a downtrend and it signals a bullish reversal. I’m going to show you the same KGKG chart with an emphasis on the next candlestick after the hammer dojis we identified.

In this case, the inverted hammer is a confirmation of the reversal created by the price support of the hammer dojis. You might say it was the hammer that drove the nail down. Like I said, there’s a lot going on in this chart.

One thing to consider when looking at this chart: Notice the low trading volume (lower graph) during the late morning and early afternoon? This is also when most of the consolidation happened. Big price swings happen during high-volume trading. I prefer to make plays during the big swings. 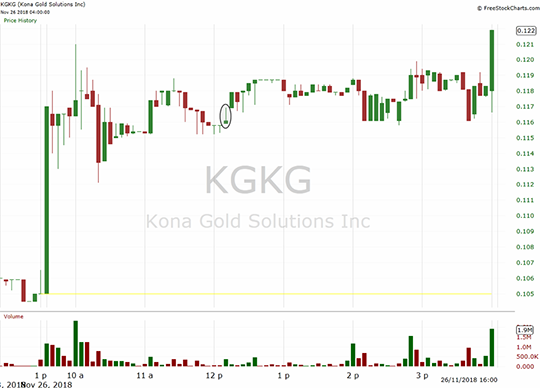 I hope you now understand the importance of the candlestick chart in technical analysis.

I have a few key tips for you:

Is candlestick charting reliable? Not all candlestick patterns are reliable but finding one that charts fundamentals can be beneficial.

I’ve only scratched the surface of candlestick patterns. Since you’re serious about trading, you need to study this subject. A lot. Like, every day. Make it a habit. You should be looking at charts and trying to find these patterns so you can identify them. They need to become second nature.

Candlesticks patterns are packed with information that you can take advantage of while trading. I hope you see there’s a simple beauty to candlesticks, but there’s also a huge amount to learn.

Like everything to do with day trading, you can’t cheat success. Since you want to master this set of skills, it’s time to get to work. Put in the time and effort and it can potentially pay off for you.

The fact of the matter is if you understand the fundamentals, it can literally change your life. Many of my students have gone from “average joe’s” to millionaire, but you need to be committed, and you need to know the basics.

That’s why I stress them so much. I want you to succeed. I wouldn’t be writing this if I didn’t. But all I can do is give you the resources you need. You are the one that needs to go do it.

A Fresh Dose of Biotech Perspective

Trend Trader Daily editor, Lou Basenese serve up some fresh perspective on one of his favorite sectors: biotech

The Formula for Finding Your Sweet Spot

One Company May Hold the Key to Alzheimer’s Treatment

Technology Profits Confidential editor, Ray Blanco shares “Alzheimer’s is one of the most heartbreaking diseases out there. But we may be closer to a cure than you think”

As you know, my number one rule is to cut losses quickly, but how do you know when it’s time to cut and when you should hold on a little longer? I’ll explain my rules today so you can be prepared.

I’ve been getting a lot of questions like “What sort of trade is the best when the markets are this volatile?” My answer may shock you…