Rome, Japan and a Traveling Trader

As you can see in the picture below, I’m living the dream. It’s possible for me because I learned to trade penny stocks. I want you to live your dream life.

You can start by reading these issues daily!

Last week, I was in London for interviews. Then I made my way across Europe for several days… 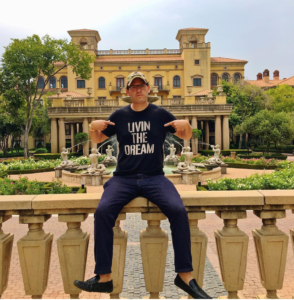 I just yesterday arrived in Japan. My charity Karamagawa is working on a bunch of partnerships.

Our mission is to donate to charities and give them exposure. The charity world is highly regulated. If we were a traditional nonprofit, the scope of our projects and partnerships would be limited.

Karmagawa helps us grow our relationships with more brands and charities. We think it brings more value to the world in the long run. You’ll see what I mean when we release the Save the Reef documentary next month.

Anyway, that’s why I’m here in Japan. Not to mention the fact that I love sushi.

As always, I’ve been trading…

But instead of talking about my trades, I’m going to focus on some student questions I’ve received lately. I’m more excited, more thrilled, and more focused on showing you the process. Often that means showing something other than the biggest winner.

No FOMO necessary… one student question deals with multiple trades of a single stock. I’ll use that example to show what I was thinking and how it played out.

With that in mind, let’s dive right into…

“Tim, when [this spider silk stock] started to tank, it was fascinating to watch some of your best students short while you were dip buying. Should we be trying to play both sides of a run — both long and short?”

I’ve said this again and again: I really don’t think newbies should be shorting. If you’re asking this question, you shouldn’t be short selling.

Here are some examples:

I’ve mentioned Kraig Biocraft Labs Inc. several times in the past. It was one of the best stocks for me in the entire market for nearly a month. Even in the face of market uncertainty fueled by trade tension with China.

It was a low-priced stock. A lot of shorts were too early. Frankly, I think that’s what spiked it all the way to 50 cents per share. We’ve also seen short squeezes on Biocept Inc and Outlook Therapies Inc.

Both stocks spiked, then other chat rooms encouraged shorting them.

The result was a lot of newbie shorts got in too early. When they got squeezed, they covered for a loss. As they covered, the price of the stock kept going up. Great for longs who recognized it.

Please repeat after me:

It’s dangerous for newbies to short.

Did you say it? Do yourself a favor and say it. That’s not to say you shouldn’t learn about shorting. I’ll explain why later in this post.

Back to the question…

“Look, this company has warrants, it’s gonna crash … it’s gonna crash.”  Or whatever reason their so-called guru gave them for shorting every stock that has a big spike.

There are a lot of newbie shorts these days who don’t understand the risks of short selling. They enter too quickly.

The problem: If you wait until what’s usually the right time, there might not be any shares available to short. So, you actually have to enter early.

But we’re seeing a lot of squeezes, so it’s very dangerous for newbies. You can have these big-time short sellers who can ride out the squeezes because they have a big account.

FOR EXAMPLE: If a newbie gets in at $1 per share and the stock squeezes to $4 a share — they’re in trouble. Too often it ends in introspective tweets about lessons learned the hard way.

I prefer dip buys and strong first green days. Both of these strategies can help a newbie or someone with a small account. Over time it’s possible to grow a small account — as long as you study, learn the rules, and follow them.

Even then it takes time to get consistent.

When It’s Time to Slow Down

Here’s another question, also about…

“When you alerted your exit from a spider silk stock [earlier in May], you mentioned overtrading. At what point do you tell yourself it’s time to step away?”

I think I did three of these trades that day. Sometimes you got to just walk away from your laptop or smartphone. You have to recognize you’re overdoing it.

My exit comment for that trade was exactly that — I acknowledged it was time to stop.

The stock they are referring to had a big run up from mid-April. Then it lost 20% over two days, but it wasn’t until early-mid May that it crashed big. I expected a bounce off the crash.

There was a bounce on May 20 when it gapped up. By 10:05 a.m. it was roughly 32% above the previous day’s close. I was tentative by then. I anticipated this bounce and wanted it too badly.

When you anticipate and want something bad enough, you usually screw up. I still made money.

But I was too soon. They were dip buys — I took the singles because the big bounce never came. Then, when it was the right time for the 32% bounce on May 20. I was all in my head because I’d over-traded it before. I made roughly a penny a share on a 9 cent per share move.

Admittedly, I was obsessed with this stock. Some students were even messaging me asking why I was so obsessed with it. It’s because if you look at the 30-day chart the stock went from 8 cents to 50 cents then dropped roughly 60% from its highs.

I’ve seen this kind of run up and crash so many times before. It can be a good time to dip buy, and I anticipated a morning panic to buy into. It did a decent job but was also disappointing. The key is that I played it safe.

I’m OK with being wrong. I’m not just holding and hoping, saying, “This is definitely the bottom.” I see a lot of people trying to dip buy … It’s like they want to stick a flag in the chart and say, “This is it. This is the bottom.”

Still, I did well with it because I always use a trading plan.

There Are a Few Lessons Here

Small wins add up. It wasn’t necessary for me to tie up my trading capital for long periods of time. My longest trade was an overnight hold. Most were a matter of minutes. The funny thing is I made roughly a penny per share on some of these trades.

On one of the May 16 trades, I managed to squeak out 2 pennies per share. Crazy, right?

So even though the pattern didn’t play out the way I anticipated, my account got bigger.

On to our final student question for this update…

“Tim, why are choppy stocks so difficult to play?”

Because they’re choppy. For me, I really like to control my losses above all else.

So even if I’m right about a choppy stock, most likely I’ll mentally stop out. Because that’s how the stock trades. I don’t wanna risk a big loss, so I don’t do well.

For those of us who really care about cutting losses quickly, it’s just impossible with a choppy stock. When a stock has too wide a range, too much volume, too much volatility — there’s no safe way to play it. I’m just not good at it.

So I’ve learned to step aside.

Sometimes the worst, most fundamentally flawed company can become the best performing stock if there are too many shorts.

I promised to explain why you need to learn about shorting even if you’re a newbie. Pay attention!

Even though I don’t think newbies should short, it’s useful to LEARN about shorting. I have over 400 video lessons in my library on short selling.

I tell newbies short selling is dangerous and they shouldn’t do it. Then they’re like, “Well, if I’m not gonna short, I’ll just skip these…”

It’s important to understand how shorts think. It’s important to see how a short squeeze can be created. Even if you’re not shorting. You have to learn all the angles of this penny stock game.

It’s not rocket science, but you have to learn all the angles.

It’s not just about picks. It’s mindset. It’s motivation. It’s dedication. You have to learn the whole process. Rules, pattern recognition, risk management … Why news catalysts can move stocks … How earnings can affect a stock’s price for several days or not at all. You have to learn everything.

I hope you take advantage of spare time to continue studying. (You studied over the long weekend, right? If not, get on it.)

Remember: Learn about short selling… But consider holding off on shorting until you’re experienced and trading with a big enough account.

Living the “App-top Lifestyle” Could Change Your Life…

I LOVE being able to trade from practically anywhere in the world. I call it the “Laptop Lifestyle”, but today, I’m going to teach you about the “App-top Lifestyle”, and how it can take your trading to the next level.

My 9 Mistakes You Do NOT Want to Repeat

Find out about my nine biggest mistakes and how you can both avoid and learn from them.

Looking for an easy place to get started with a trading app? These apps are ideal for beginners.

Why RSI Matters to You

Technical indicators are some of the handiest tools in a trader’s repertoire. But why exactly, and which ones should you use?

Why You Should Consider Taking a Class on THIS

On the fence about pursuing a day trading education? Here, I’ll talk more about what day trading classes have to offer so that you can decide whether or not they are for you.

Detective Sykes is on the Case

If you want to change your life as we move into 2020, this is your guide.