Profit from This Bull to Bear Shift

As you might know, my top trading challenge students and I rely on predictable patterns to create our wealth and a head and shoulders chart pattern signifies a particular change in desirability for a stock or security.

Have you ever wondered how Wall Street, or reputable traders, always seems to know ahead of time when a stock is about to go sideways, and gets out at just the right time? Or that they know just when to get in, before a stock surges?

To a newer trader/investor, this can be puzzling, it not troubling, to always feel like you’re on the outside looking in.

Well, knowing chart patterns inside and out is key to your success so I HIGHLY recommend you study them, since they can help you to play along with the big boys. It’s not clairvoyance, and it’s not magic.

But it works for me more times than not, nonetheless.

The trend shifts from bullish to bearish to bullish in one of the most predictable volatility patterns in the world of Wall Street.

Right afterwards, traders know that there’s a high degree of probability that the end of an upward trend is near.

The Head and Shoulders Pattern

In the preceding description, the first and third peaks represent the relative shoulders, while the second one is bound at the neckline of the figurative human formed by the market activity. 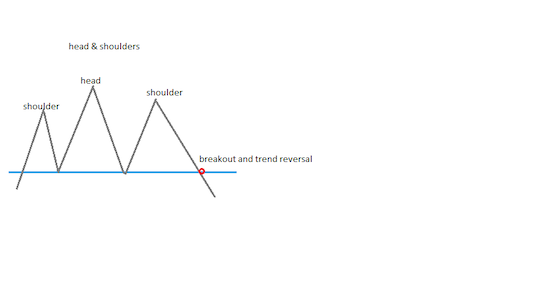 But this can be upside down, too. Sometimes a head and shoulders pattern can signal an upcoming bullish trend after a period of bearish activity.

In this case, stock prices would reach three lows in a row, punctuated by short rallies. The lowest trough becomes the head, while the two adjacent troughs form shoulders.

Once the pattern is through, the true tendency of the stock takes dominance. 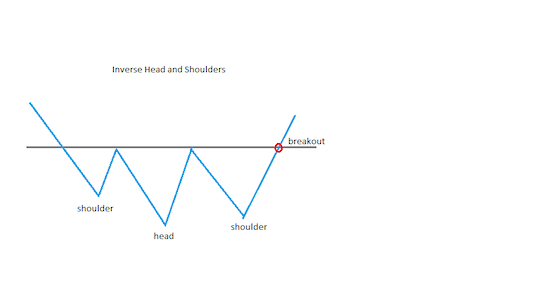 The head and shoulders pattern is a true testament to the tug of war that plays out in all open markets. In quantum physics, scientists say that either a particle’s mass or location can be known for certain at one point in time, but not both.

The speed of transactions in today’s computer trading world works similarly. A price point moves quickly relative to the market forces acting upon it, especially if the related stock is popular amongst a niche market.

The first description of the head and shoulders pattern tracks the fading momentum of a previously bullish stock.

Market bulls, who generally already have a stake in the success of the stock, increase their exposure to the security, pushing the stock’s value upwards in two consecutive price shocks.

It is possible that other investors will buy into the higher valuation, putting in their money to further the future of a security that would have otherwise failed.

But if the head and shoulders pattern is allowed to continue through the second trough, the security’s demise is certain. Knowledgeable investors – the kind that newbie traders follow on twitter and on blogs – thrive on easily identifiable patterns to gain a following.

They hawk the markets for clear head and shoulders patterns to share to their subscribers. On today’s Wall Street, these patterns rarely last beyond their second trough because of the thousands of experienced traders on the lookout for this trend.

A related fluctuation tracks a “triple top” phenomenon, which marks three consecutive price hikes, all at nearly the same level, indicating that buying interest is losing steam despite efforts by market movers to keep the stock desirable.

Necklines connect the pattern’s two troughs, which might be drawn at a slight angle, depending on the nitty gritty details of the stock at hand.

The neckline works as a symbol of resistance that causes prices to “bounce” from the level of a previous trough (or crest, depending on whether or not an inverted head and shoulders pattern was occurring).

Moments of controlled volatility create the trend disturbances that make and break hit securities. Three bumps on a relatively stable upward trajectory indicate turbulence ahead, or at least nervousness on behalf of the key stakeholders watching the stock’s price in the most paranoid fashion.

Every Security Has Its Own Struggle

More embarrassing versions of this trend reveal themselves in the descending tops pattern, where organized buys of a particular security cause prices to rush upwards temporarily, before continuing a downward trend. This repeats one, twice, and sometimes even three times before key investors give up on their bet and sell off their stakes.

Every security has its own struggle. If the price changes have to do with corporate performance, the stock price will fluctuate in lockstep with corporate filing dates and major speeches by the company’s leadership.

But, if the changes relate to slights of hand on Wall Street, the numbers could change at the whim of key investors, whether or not their outlooks match performance figures published by the corporation’s public relations staff.

In the end, the head and shoulders chart pattern is just one of many, and charting is just one small part of an overall strategy that every successful trader must understand, and can hopefully take part in.

Learning to identify this chart pattern, and what it will mean for the future of any given stock will allow you to capitalize on the same information that even the big boys on Wall Street use.

The Secret to Tech Investing

Technology Profits Confidential editor, Ray Blanco shares profitable tech opportunities that are also doing good in the world. “Tech continues to be the best place to put your money because it gives you the chance to do this kind of good for the world.”

How to Predict a Stock’s Performance

Penny stocks don’t have much in the way of fundamental information because, as I said before, they don’t have to publish financial documents. However, there are a few things to look for when trading penny stocks. Positive and negative indicators tell you what kind of risk you’re taking on by investing in a particular stock, even at a nominal amount.

Enhance Your Trading Game with THESE Calculations

How to calculate moving average and why it’s important for trading.

Not only is it rocking world markets, but it’s now an existential threat to our way of life.I’ll give you important news to share with friends and family. And I’ll show how I’m still trading in this crisis.

Top Tips for Identifying THIS Pattern

How to recognize and capitalize on the dead cat bounce phenomenon?

When Is the Right Time to Cut Your Losses?

A lot of people ask me, “Tim, what does it mean to cut stock losses? How do you know when to exit a trade?” Both questions are very important and point back to my number-one rule in stock trading…