Yesterday we talked about forex trading strategies. I explained technical and fundamental analysis and emphasized how important it is to do your own research, and to look at patterns and charts.

Today let’s talk about some of those patterns, charts and some basic terminology that goes along with forex trading.

For instance, the most popular currency pair in the world is the euro and the U.S. dollar.

In this case, the currency pair would look like one of these:

Either way, the euro is the base currency and the U.S. dollar is the quote currency.

Major pairs are the most commonly traded pairs on the forex market exchange. They consist of EUR/USD, USD/JPY, GBP/USD, AUD/USD, USD/CHF, NZD/USD and USD/CAD. These pairs are responsible for about 85% of market activity.

They’re also the most liquid trades because of their high volume. If you plan to trade on these currency pairs, you have to pay careful attention to technical and fundamental analysis.

A cross-country pair is simply a currency pair that doesn’t involve the U.S. dollar. In other words, there’s no need to exchange the currency into U.S. dollars to compete the transaction.

As the name implies, exotic currency pairs refer to rare pairs that are rarely traded on the FX exchange. Exotics can change over time as pairs fall into and out of favor based on economic conditions and other factors.

For instance, EUR/TRY is considered an exotic. It’s the euro as the base and the Turkish lira as the quote.

Many exotics include the U.S. dollar, such as USD/DKK (the Danish krone as the quote currency) and USD/THB (with the Thailand baht as the quote).

When it comes to exotic currency pairs, you’ll want to pay attention to macroeconomic factors. For instance, what does supply and demand look like? How are the countries faring in terms of international relations?

Political instability can give you a false understanding of where an exotic currency pair might go. Be careful with these kinds of trades, and if you start to lose, get out quickly.

I’m a big believer that you can’t learn to trade in any market without first understanding the terminology. Jargon floats around the forex market like flies, and if you can’t keep up with the conversions or literature, you’ll get lost fast.

We’ve already talked about the different types of currency pairs, so I won’t go over those again. You’re also familiar with forex trading and how it works. There are two key terms, however, that you need to know backward and forward before you jump into trades.

Remember the currency pairs I talked about earlier? This is where they come into play.

For the sake of our example, let’s look at a trade on EUR/USD.

When you take a long position on EUR/USD, you’re betting that the base currency (EUR) will go up in price in comparison to the USD. In other words, you’re going long on EUR.

It’s also called a buying position because you eventually want to sell your EUR for a profit because of the expected rise in value.

But what if it’s the other way around? If you take a short position on EUR/USD, you’re betting that the euro will decrease in value compared to the U.S. dollar.

Forex trading is unique because you are, in effect, always going long because of those currency pairs.

In other words, even though you’re taking a short position in the last example, you’re actually going long on USD. It’s different from the stock market, which typically revolves around the shares rather than the money used to buy or sell them.

You don’t often hear of a stock trader who’s going short say, “I’m going long on the USD,” even though that’s the case because he or she is using U.S. dollars to buy or sell shares.

I mentioned charts before, but I want to give them a little more attention. If you’re going to get started with forex trading, you need to know how to read charts, even if you’re planning to focus on fundamental analysis.

The most common charts you’ll find are candlestick, bar, and line charts. Each offers benefits and drawbacks depending on how you like to visualize market patterns. I’m partial to candlestick charts because they make the most sense to me.

Let’s look at each type of chart individually to understand what they tell you. 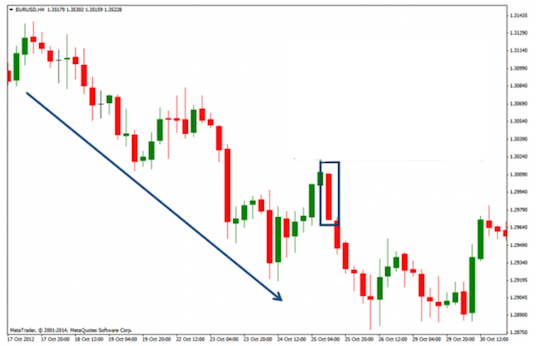 As you can see, each bar looks like a candlestick.

From the candlestick chart, you can glean four pieces of information about a currency’s behavior: opening price, highest price, lowest price, and closing price.

The wicks (also called shadows) show you highs and lows for a day’s trades. You can make inferences based on the difference between the opening closing prices (the length of the wicks).

A bar chart is similar to a candlestick chart, but not quite as data-intensive. A typical bar chart looks like this: 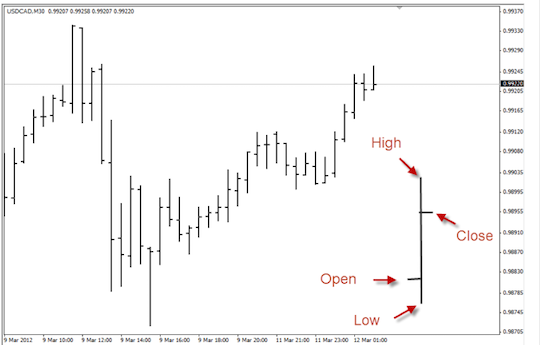 The top of the bar indicates the high price while the bottom indicates the low price. In between, you have the opening and closing prices represented by connected horizontal lines to the left and right respectively.

The line chart is probably the one you’re most familiar with. It’s also the simplest, but it doesn’t provide as much insight as candlestick charts. 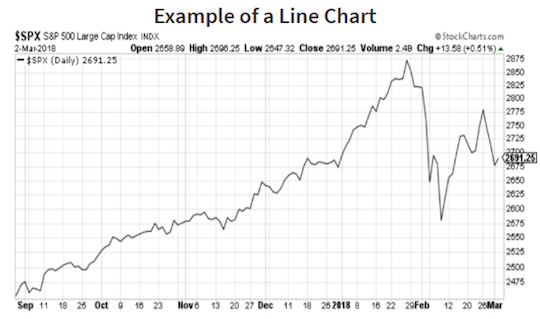 As you progress, you can check out other bar types to figure out if they make more sense.

It’s also the easiest chart to overlay with other charts. You can see differences in weekly behaviors going back months or even years to understand historical performance.

Every investment comes with inherent risk. Don’t let anyone tell you different.

If you’ve followed my career for any length of time, you know I’m opposed to high-risk plays. I want to keep my money safe and grow it when the timing seems right.

I encourage you to follow the same philosophy with Forex trading.

While high volume and liquidity make forex trading incredibly lucrative for the savvy investor, it also brings along additional risk. The market can move so fast that you lose thousands of dollars without realizing a change occurred in the market.

Remember, you’re investing along with hedge funds and big financial institutions that use high-tech software to make rapid-fire decisions. If you’re not careful, you can lose big to them.

Is Forex Trading Worth It?

Forex trading is worth it if it brings you joy and makes you money. That’s it.

I recommend trying it for a short period, such as six months. Make short-term trades to get a feel for the market, and limit your investments to 1 percent of your trading account.

Resist the urge to use tremendous amounts of leverage. You can get yourself in trouble that way. Remain conservative in every play you make.

How To Become a Forex Trader Expert

If you want to become an expert in the forex market, you’ll have to devote significant time to education. The more you learn about the market and its intricacies, the smarter your plays will become.

I’m not talking about a weekend immersed in books. I’m talking about months or even years of hard-core studying to prepare yourself. Otherwise, you’re setting yourself up to fail.

Forex trading is one of the most popular investment choices in the world. It’s also extremely lucrative if you play it right.

Of course, it comes with risk, but that’s true of any investment.

The 5 Best Ways to Never Make It as a Trader

Today you’ll learn the five things that you could be doing that are hindering any potential you have to make it as a trader. If you can change your mindset and break free of these five ruts, you will be able to start forging your path to success.

What you need to know about margin trading.

How Many of These 12 Millionaire Habits Do You Have?

Here are eight habits of successful people--millionaire habits. Read through to find out how many you already possess, how many you need to work on, and learn why each trait will help you in your journey to become a millionaire.

Learn the five biggest takeaways from an interview I did with Steve Harvey. They’ll make you a better trader all around.

Over the last 2 days, I’ve explained what small-cap stocks are, why you should consider adding them to your portfolio, and today, I’ll tell you how you can find them.